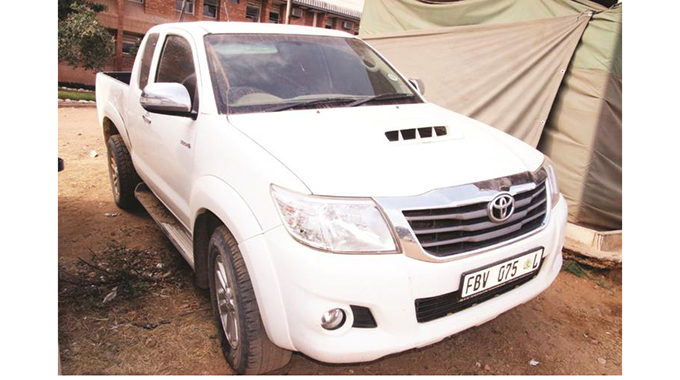 The national security task force on Sunday morning intercepted a suspected stolen vehicle that was being smuggled from South Africa into Mozambique via Zimbabwe near the Tshikwalakwala.

The area lies 135km east of Beitbridge town and the vehicle was intercepted less than 10km from the Limpopo River.

He said three other suspects were still on the run.

Ass Comm Nyathi said the value of the recovered Toyota Hilux was yet to be ascertained.

“The two are assisting the police with investigations.

“Our security team comprising the police and members of the national army who are implementing a national operation targeting cross-border crimes, received a tip-off concerning the smuggling of the vehicle.

“They then laid an ambush at around 5am on a road that was being used to transport the vehicle which had five people on board including the two who have since been arrested,” he said.

Ass Comm Nyathi said when the smugglers realised that they had been cornered, three of them escaped while Massigue and Mbedzi were arrested at the scene.

He said a search of the vehicle led to the discovery of some identification documents and driver’s licence belonging to a South African national.

“Indications are that the vehicle had been stolen from South Africa and was being illegally transported to Mozambique. However, further investigations are in progress,” he said.

Ass Comm Nyathi said the duo would soon appear in court on smuggling and related charges.

The smuggling of stolen cars from South Africa via Zimbabwe, is rife with authorities from both countries recovering over 40 vehicles along the boundary this year.

In 2012, Zimbabwean police smashed a well-orchestrated car smuggling syndicate near the Panda Mine area and arrested seven Malawians and recovered five top-of-the-range vehicles.

The vehicles included two Toyota Fortuners, one Nissan Navara, Toyota Hi-Rider, and a Toyota Vigo, all worth R4 million.

It is believed some of the syndicates are linked to security personnel manning the border and officials from the Zimbabwe Revenue Authority (Zimra) and the Central Vehicle Registry (CVR).

The officials are alleged to be facilitating the smuggling and registration processes.

In December 2017, a Zimbabwean, Frank Dube was arrested by South Africa’s elite police, the Hawks, for orchestrating the theft of six new Ford Rangers at a car dealership in Phalaborwa.