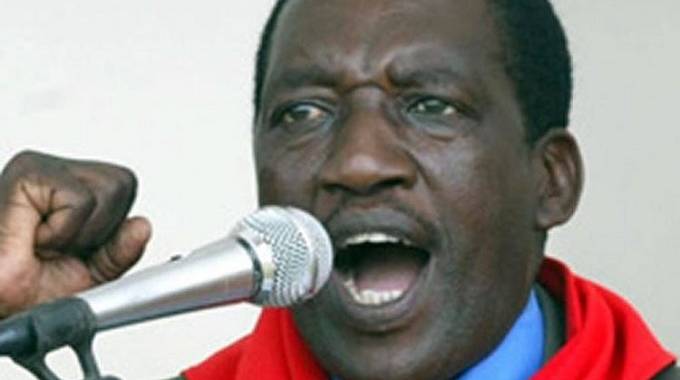 Cde Sikhosana (70), who was also acting Zanu-PF chairman for Bulawayo Province died at the United Bulawayo Hospitals (UBH) yesterday morning. He had been admitted since Monday last week.

Last night the party’s Secretary for Administration Dr Obert Mpofu conveyed the message of the hero’s status to the family and mourners at Cde Sikhosana’s home in Nkulumane.

“His Excellency the President and Fist Secretary for Zanu-PF Cde ED Mnangagwa has conferred a National Hero Status to the late Absolom Sikhosana. The late Absolom Sikhosana will be interred at the National Hero’s Acre at a date to be advised. I shall be most grateful if you make the usual arrangements of his burial and payment of benefits to his dependants, he is from Bulawayo Province,” said Dr Mpofu.

Dr Mpofu said this was the first time the President has conferred a National Hero Status to an individual before the party received a letter from the deceased’s province.

“This is a first, and usually the first thing that the President asks me when someone passes on is what his/her province is suggesting. But the first thing that the President said to me was that I start working towards this (national hero status), he never asked about what the province had said. I am only receiving the letter from the province just this evening, which means Cde Sikhosana was a person for the whole nation that did not want to boast about his importance in the party.

“He was a selfless person; this is why the party had asked him to be the acting chairman in Bulawayo despite being a Politburo member. This never happens but with him it did, he was our chairperson and since his appointment, we never heard of any squabbles in Bulawayo. I hope there won’t be any after this,” he added.

Dr Mpofu said it was a dark day for the nation and said Cde Sikhosana served diligently in the party until the time of his death.

“He was patient with everyone, he never got into squabbles, he was everybody’s friend. During his tenure as Secretary for Youth there were no problems, he guided the youths well, he chided them at the same time moulding them,” he said.

“Cde Sikhosana died a poor man, because he had no time for (personal issues) but he had all his time to the party and by so doing we want to say thank you very much for a job well done. He played his part. On Monday when he was admitted at UBH he called me personally when he got to the hospital around 10 am. He said ‘Sisi, sisi I’m failing to get out of the car, please help me’, and I could sense that there was something wrong, I asked him where he was and he said he was at the car park of the hospital. I quickly phoned Dr (Narcisius) Dzvanga ( UBH clinical director) who swiftly got to the car park to assist Sikhosana and took him to the hospital and he was admitted. Later on, I went there in the evening and he was very grateful that I assisted him. He said to me ‘Thank you so much for assisting me, I think I was dead because I cannot remember how I was admitted’.”

“We were six in the family with three girls and three boys. Two elder sisters are late, he was fifth in the family while I am the last born. He has not been well for some time suffering from a heart problem. Then he was diagnosed with prostate cancer as well as anthritis. We were told his kidney had failed. Growing up we were very close up to his death. He was not a violent person and liked socializing with people. Absalom was a friend of everybody. He took me as his child and he had so much love for me and he recently visited me in Nyamandlovu just two weeks ago,” said Mrs Ndlovu sobbing.

Cde Sikhosana was born on 26 October 1949 in Matobo District under Chief Masuku in Matabeleland South Province.

In 1965 he moved to Mzilikazi Secondary School, then Mgandane for his from One to Four. In 1969 he attained a certificate in Salesmanship from Rapid Results College and a Diploma in Public Relations from Ruskin College in the United Kingdom.

He worked as a Tally Clerk for the Bulawayo Clothing Factory (Charter Clothing) from 1970 to 1975. Between 1976 and 1977 Cde Sikhosana was elected regional organiser for the Rhodesian Clothing and Garment Workers Union at the time Trade Unions. His movement from Charter Clothing to trade unionism was orchestrated by the political leadership to fill the gap left under the detention of the late nationalist Cde Enos Mdlongwa.

In 1977 he left the country for the armed struggle to Zambia via Botswana and was trained at Camp of General Training (CGT) as an infantry cadre. After demobilisation in 1982, he joined the Bulawayo Municipal Workers Union and became the organising secretary. In 1992 he was seconded to the Public Service International Head Quarters in Geneva, Switzerland.

In 1983 he was elected National Secretary General for the ZAPU Youth wing. Between 1987 and 1989 Cde Sikhosana was instrumental in uniting the structures of the two liberation parties after the signing of the Unity Accord in 1987.

He was elected Youth Publicity and Information Secretary for the united party Zanu-PF at the inaugural Youth Conference in 1989. He became the National Deputy Secretary for the Zanu- PF Youth League deputising the late National Hero Chief Air Marshall Josiah Tungamirai.

Between 2000 and 2014, he served as Zanu-PF National Secretary for Youth Affairs. In 2014 he became Deputy Secretary in the Department of Implementation of Indigenisation Policy in the Politburo. In October 2019 he was appointed acting chairman for Bulawayo Metropolitan Province, a position he held until the time of his death.

He is survived by a wife, Mrs Jelina Dube Sikhosana, five children and six grandchildren. Mourners are gathered at his home, Number 3115 Nkulumane 5, Bulawayo.