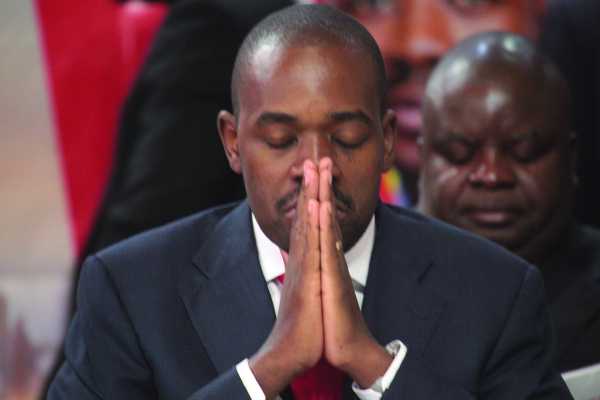 Following the Zimbabwe Electoral Commission (Zec)’s declaration of Mnangagwa as winner of the July 30 presidential election with a 50,67% margin, Chamisa, who came a close second with 44,3% of the vote, approached the Constitutional Court (ConCourt) arguing he had been defrauded of victory by collusion between Zec and the ruling Zanu PF party.

But the ConCourt on August 24, after a full hearing, dismissed the petition on the grounds that it lacked evidence, forcing Chamisa to escalate his fight to the continental body.

Highly-placed sources within the MDC Alliance this week claimed the move to approach the ACHPR was a “publicity stunt”.

“It was nothing beyond public posturing. It was a publicity stunt that has never been followed. In all meetings that we have had since then, this issue has never been raised. Nobody, not even the president, has brought it up for discussion,” NewsDay heard.

“The matter has not been set down for hearing. We are yet to hear from the ACHPR. Such cases take long and really we had no basis to request that it be heard on an urgent basis,” Sibanda said.

But the ConCourt threw the petition out on the basis that it lacked sufficient evidence.

Chamisa argued the ConCourt had inherent bias towards Mnangagwa, hence his move to seek the intervention of the regional body.

“The MDC Alliance has instructed its local and international lawyers to immediately lodge a petition with the African Commission on Human and People’s Rights (the ACHPR), otherwise known as the Banjul Commission, to challenge the August 24 Constitutional Court (ConCourt) controversial decision validating Zec’s decision that Mnangagwa won the July 30, 2018 harmonised general elections,” the petition read in part.

According to the petition, the ConCourt and the government are guilty of violating the rights of citizens.

“The grounds of the petition are based on the flagrant and multiple violations of the universal human rights of the voters and people of Zimbabwe by the current Zimbabwean regime and the ConCourt, including the right to free and fair elections, right to a fair hearing before an impartial court, right to legal representation by counsel of choice, right against undue political interference and the right to be governed by a legitimate government,” Chamisa said.

He added that the ACHPR has power to declare human rights violations and use that to overturn Mnangagwa’s victory in his favour.