OPPOSITION MDC Alliance leader, Nelson Chamisa has hit out at government for its failure to dedicate more resources from the national purse towards the fight against coronavirus. 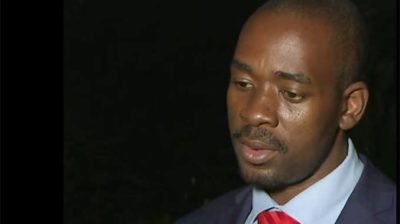 Since last year, Finance minister Mthuli Ncube has been bragging about recording budget surpluses on a monthly basis, a development he has attributed to the government’s fiscal consolidation programme the Harare administration embarked on.

Reports have indicated that under Ncube, Treasury has witnessed financial inflows to the tune of US$437 million during the 2019 financial year.

It is these resources that the MDC Alliance leader, through his spokesperson, Nkululeko Sibanda, argues should be devoted to the fight against the novel virus.

Sibanda told NewsDay that government should prioritise the fight against coronavirus in the allocation of resources if Zimbabwe is to win the war against the pandemic.

“The government cannot say it does not have the resources. People are being taxed every now and then through the 2% (intermediated electronic transaction) tax which government is collecting on financial transactions. We want to state that these are the revenues that should be dedicated to programmes such as the COVID-19 pandemic,” he said.

Sibanda added that government was doling out huge sums of money in lucrative deals that have so far benefited acolytes of those in the corridors of power.

“We can’t say there is no money when contracts worth millions of dollars in most of our spheres are being given to people who do not deserve. We know there are national reserves. Any government worth its salt has reserves that are always in place. These are the reserves that should be brought into play at this point in time,” he said.

Sibanda implored Zimbabweans to hold government to account and to also ensure that it plays its part in ensuring a successful fight against the coronavirus.

Zimbabwe has recorded 29 cases of COVID-19, with four fatalities.

Over 2,5 million people are infected with the virus worldwide while over 180 000 have died.

“The government must have the resources to look after its citizens during these times,” Sibanda said.

“If at any point the government says it does not have the resources, it then ceases to be a government.

“We cannot have a situation where these people in government feed the nation with these stories that there is no money to take care of the people and those citizens in difficult circumstances.

“If the government does not have that money, let them resign and leave and those that are able to handle such situations will come on board and rescue the country.”