Chamisa on the brink 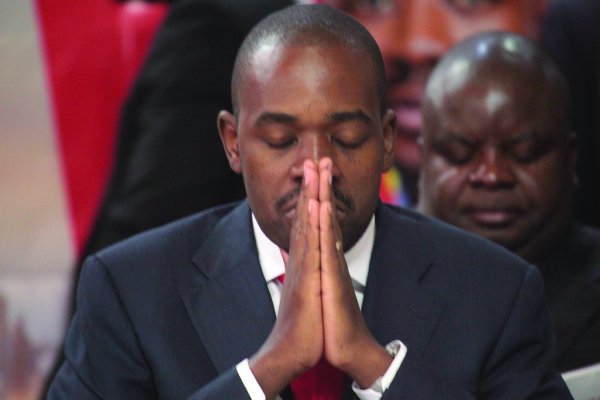 MDC leader Nelson Chamisa has all but claimed the presidency ahead of the party’s elective congress next month after secretary-general Douglas Mwonzora, who was touted as his likely challenger, threw in the towel during the Manicaland provincial congress yesterday.

Chamisa has so far pocketed nominations for the presidency from all the provinces that have voted.

Manicaland, Masvingo, Bulawayo and South Africa are yet to hold their own elective meetings and make nominations for the congress which starts on May 24.

Mwonzora, speaking ahead of voting by provincial delegates, said he was focusing on retaining the post of secretary-general and not challenging Chamisa’s presidency.

“I say that I will try to win the post of secretary-general of the MDC,” Mwonzora said in statements captured on a video as he stood next to Chamisa.

Mwonzora will be banking on Manicaland to hand him his second nomination for the position of secretary-general, setting him up to fight the challenge of deputy treasury-general, Charlton Hwende who has so far bagged two nominations for the same post. Insiders said Mwonzora, who called for unity within the

MDC ahead of congress, was looking to Chamisa to also rally supporters around him so that he retains his post.

After announcing that he was not eyeing the presidency, MDC faithfuls shouted and danced in jubilation to what they felt was the endorsement of Chamisa by Mwonzora.

There had been fears that Mwonzora would challenge the nomination process leading to a disputed congress and a possible split of the party.

“It is good when leaders are able to read the party mood. As a party, we have always said this is a competition of friends and not enemies and that leaders will be deployed by the people where they are best suited,” he said.

Sources said the writing was already on the wall for Mwonzora ahead of the provincial congress in Manicaland after those who were believed to have been on his side withdrew from the race for provincial posts.

Chamisa later told NewsDay that it was humbling for him to have received nominations from seven provinces, insisting that the congress remains an issue of proposition not positions.

“Very humbling, but also very emotional, because this is so much about the internal democracy of our party, you know that were there is contestation of power you will always have some of these things being focused more on positions than proposition. Our focus, I have said, is that this congress is not just a congress of personal interest, it’s a congress of organisational interests,” he said.

There has been concern over nominations in other positions with respected leaders like Welshman Ncube and David Coltart having been nominated only once, raising concern that the party could be digging its own grave if it does not push for quality.

Chamisa said people should be allowed to choose those they want to lead them in a democracy.

Party deputy president Elias Mudzuri, who is yet to be nominated for any position, has, meanwhile indicated that he is ready to challenge Chamisa for the presidency, if nominated.

The post Chamisa on the brink appeared first on NewsDay Zimbabwe.