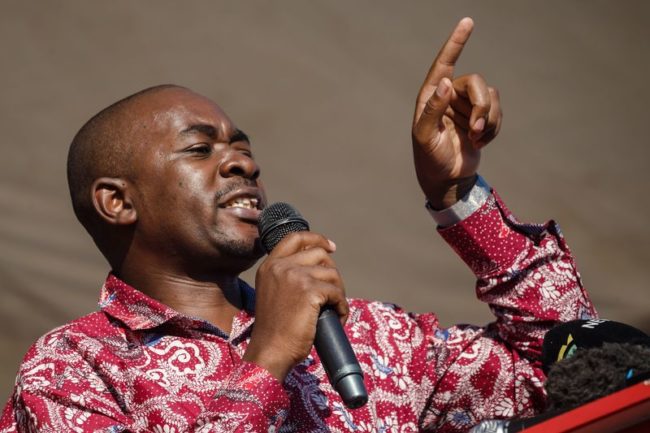 MDC leader Nelson Chamisa will on Wednesday make an address to the nation from Harare’s Africa Unity Square in what could be a test to police, who are being accused of effectively banning the opposition party gatherings.

Chamisa’s “hope of the nation address” will be done in front of party supporters and diplomats, his spokesperson Nkululeko Sibanda said.

He said police were yet to clear the event.

“Yes, I can confirm that the president will give his ‘hope of the nation address on Wednesday at the Africa Unity Square. The address is set to be attended by church leaders, diplomats, women, children and other political parties,” he said.

“Having the meeting at the Africa Unity Square is important because he is addressing the country, Africa and the world.

“So there is no obvious reason to anticipate that the police will block the address.”

Police have sanctioned only one out of 10 MDC rallies that were scheduled across the country.

“The MDC looks like a banned organisation in Zimbabwe,” Sibanda said.

“Nine out of 10 rallies have been banned by the police. Our rallies are literally banned everywhere.

“We now have what appears to be a competitive authoritarian regime and I am sure the greenlight given to today’s rally (in Harare) is aimed at creating a façade that there is democracy in the country.

“We are in a worse situation than during the late former president Robert Mugabe, at least he would not ban everything as it were.”

He said police appeared to have banned MDC activities, especially in Harare. They have lately been seen camping outside the MDC party headquarters, Morgan Tsvangirai building in the capital.

“That in itself, makes the MDC appear like a banned party ,” he said.

The post Chamisa set for ‘major address’ appeared first on The Standard.