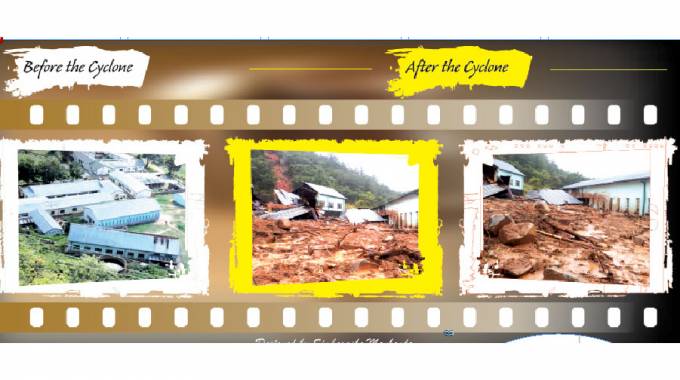 From road carnage, mining catastrophes to adverse weather phenomena such as this season’ drought, Zimbabwe has witnessed excruciating events with the latest – Cyclone Idai – being the  most traumatising.

When reports started filtering through that all was not well in Chimanimani and Chipinge areas, the first confirmed fatalities were at St Charles Lwanga seminary, where two students and a security guard perished after a landslide.

For three days, teachers and students had to bear the horror of living with the dead while surviving on stale bread.

The tale is punishing to tell for those who survived it, but the school’s deputy head Mr Albert Mapunga believes, sometimes some sadness cannot be contained by a few but has to be shared.

He narrates how a group of panicky students scurried in the dark to alert teachers about a tragedy that had struck a Form One dormitory at around 10 pm on Friday March 15.

“A debris of huge boulders, trees and mud had just knocked off the dining hall before hitting the walls of the dormitory,” says Mr Mapunga.

“But when we got to the scene, it was too dark and all we could see was rubble leading us to think it was the dining hall which had gave in and swept to the dormitory.”

Mr Mapunga says about 15 of the students who were in the dormitory were trapped in the debris and urgently needed help.

The children, on their own, used small torches to rescue one another.

But according to senior teacher Mr Lenon Chizaza, the hardest part of the night was freeing one student Donell Mashawa who was trapped under a bed base, a pile of mud and a huge fallen wall.

It is believed Donell had been trying to reach out to a now deceased Munashe Jena (13) when another wave of mudslide hit the dormitory.

Another boy, Watson Kocherani was also killed after the mudslide.

“A lot of debris had been washed into the dormitory,” says Mr Chizaza.

“And there was Donell who was trapped.”

Using a hammer and a hacksaw, the teachers, with the help of tearful yet spirited students managed to retrieve Donell after a two hour struggle.

“It was a very difficult task, at some point we would feel like giving up but the other form one boys kept giving us ideas as to how we could free their friend,” says Mr Chizaza.

“They had this determination in their eyes and it was so touching such that we kept going on even if we were losing hope and strength.”

Having managed to free Donell the teachers and students resorted to sleeping in the classrooms that had not been affected.

But that was not before securing, in another class, the bodies of two students who had succumbed to the ravages of the landslide.

The next morning the teachers tried to get help, but could not leave the school yard as the only way out had been blocked by debris such that no vehicles could pass.

Without connection to the outside world the teachers could neither leave nor send out a distress call leaving them stuck with two bodies and 171 hungry and traumatised students.

“That was when we realised that we were on our own,” says deputy head Mr Mapunga.

“There was no communication, no power, no food and no a way out, we just had to wait and pray.”

It was not until lunchtime that the teachers discovered that the security guard Chishamiso Muchabaka was missing.

One of the school’s mathematics teachers Mr Martin Chimwandere described the gory manner in which the body of Mr Muchabaka was found.

“We had prepared our makeshift lunch, but we did not have utensils to serve the students,” he says.

“So we had to send a salvage team to look for cups and plates within the debris where the dining hall once stood.

“It was then that blood gushed out of the pile as the students stepped on the debris to look for utensils. We dug out to discover that it was the security guard’s body.”

In the meantime, ‘a command centre’ had been set up in the school bus where phones were being charged and evacuation procedure being coordinated.

A few hours later the teachers made the first contact with the outside world.

“He was the one now getting the information and telling us what to do.

“He also linked us to the provincial manager of Red Cross Society Mr Paddington Mujoma.

“We received our first message of hope when we were told that there were plans to air lift us to Wengezi turn-off.”

But another message came through that the helicopters assigned to rescue them could not take off from Harare as it was cloudy and misty.

The only comforting news remained that of members of the Zimbabwe National Army who were clearing the road between Chimanimani and Chipinge who were a few kilometers from Skyline.

“We were given instructions to go to Skyline where we would be ferried by army vehicles to Chipinge,” said Mr Mapanga.

“We told our children of the good news and they were very happy.

“We advised them to only take the clothes they were wearing and no need to carry blankets and heavy material.

“We also received a call from the Mutare Magistrate Court advising us that there had been a waiver to bury  the bodies without paperwork.

“The security guard was buried by his relatives in Chipinge.

“We then made makeshift stretcher beds which we used to carry the bodies of the deceased students.”

arriving just before the evening.

Unfortunately upon arriving at Skyline there was little coordination and no shelter.

The crew trekked back to the school farm house about two kilometres  away, for the night as it was raining, before making their way back to Skyline on Monday morning.

After much waiting and frustrated arguments with rescue teams, the students and teachers were finally ferried to Mutare and the majority of them to Harare.

The school is now planning to conduct lessons in Harare upon securing a venue.

Mr Mapunga appealed for donations to assist in the school rebuilding exercise.