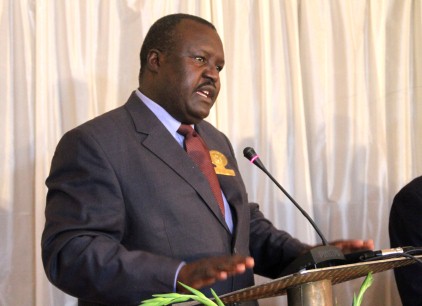 HARARE – President of the National Council of Chiefs (NCC) Fortune Charumbira has filed an emergency motion in the High Court to fight a ruling directing him to issue an apology for rallying other chiefs to support the ruling Zanu PF party in the July 30 elections.

The move came as Charumbira on Monday made a last-ditch attempt to stall a landmark ruling that has shaken the ruling party’s alleged strategy to use traditional leaders as agents of coercion and auxiliaries of Zanu PF.

In the court ruling delivered two weeks ago, Charumbira had been given seven days to retract his statements, but failed to do so and is now seeking rescission of the judgment.

Charumbira cited the Election Resource Centre (ERC) as the respondent.

The ruling being challenged by Charumbira was handed down in default, after he failed to file opposing papers.

“The reasons for the failure to oppose the court application in the principal proceedings are the following: I am not sure as to what exact date the papers in the principal proceedings were served on me. However, during the period when the papers were served, owing to my duties as the president of the second applicant (NCC) and as a member of Parliament of Zimbabwe, I was in and out of the country,” he said.

He said during the month of May, he spent a week in South Africa and also travelled in April.

“As a result, I was not able to attend to the filing of opposing papers in good time.

“I remember also the fact that the papers which were served at the Parliament of Zimbabwe were served during a period when Parliament was not sitting.

“Accordingly, I did not get immediate knowledge of the papers because Parliament was on recess. Consequently, the papers which were served at Parliament only got to my attention later,” he said.