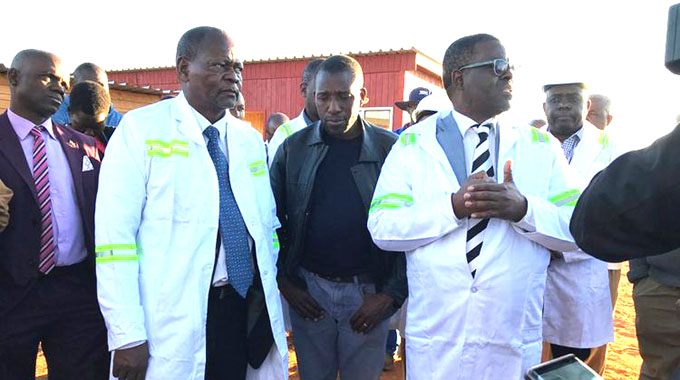 Business Reporter
ENERGY and Power Development Minister Fortune Chasi has demanded completion of the multi-million dollar 100 megawatts Gwanda solar project saying he wanted to see electricity being generated from the power station after Government paid US$5,1 million in tax payers’ money for its construction.

The energy minister also said an explanation from Zesa Holdings, the holding arm of the group’s power generation unit, on why there have been crippling delays to the implementation of the Gwanda solar project was necessary.

This comes as Zimbabwe is grappling rolling power cuts due to electricity shortages that have been occasioned by significantly reduced electricity output at Kariba South hydro plant, which had its water ration for power generation significantly cut down by Zambezi River Authority due to receding lake water levels.

Minister Chasi was in Gwanda on Friday to apprise himself with the progress at the slow moving solar project, for which State-owned Zimbabwe Power Company (ZPC), paid a staggering US$5,1 million to have pre-commencement works done, ahead of actual phased construction, with little of initial works done thus far, which includes land clearance and site fencing and topography studies.

Earlier, the Energy and Power Development Minister had toured the outdated Bulawayo Power Station, which was de-commissioned a few years ago and is set for major systems overhaul under a multi-million dollar re-powering programme.

Delays in the implementation of the Gwanda solar project have already resulted in a contractual dispute between Zesa and contractor, Intratrek Zimbabwe, which saw the power utility attempting to terminate the agreement.

Zesa wanted to terminate the agreement on the grounds that the contractor had violated the parties’ contract after failing to complete pre-construction works within the stipulated time as agreed, despite receiving payment of US$5,1 million.

But Intratrek, in its heads of arguments, accused the State power utility of frustrating the project including through causing the arrest of the company’s director, Wicknell Chivayo.

The project contractor also argued that delays on the project were not its fault given that financial closure was scuppered by the negative effect of Government’s legacy debts in China where Intratrek intended to raise project finance.

Construction of the Gwanda solar plant was quoted at US$172 million, but  Intratrek had offered to cut down the price to US$132 million commensurate with the falling costs of constructing solar energy plants across the entire world.

The firm further claimed that this was confirmed by actions of the Ministry of Finance and Economic Development, which in 2016 and on realising challenges of raising funding in China’s Export and Import Bank (China Eximbank), instructed CBZ Bank to float energy bonds to raise requisite funding for the project. As such, when Zesa tried to terminated the Gwanda project contract, Intratrek contested the purported cancellation of the project agreement and won in a ruling delivered by the High Court last year, declaring the contract valid and demanded that the parties find a way to ensure that the solar power project is implemented.

While the contract for the project was signed in October 2015 and part payment made to the contractor (Intratrek Zimbabwe) for the pre-construction works to be done, little progress has been recorded on site at a time the country is now facing acute shortage of electricity that has spawned severe rolling power cuts.

The minister reiterated that the Gwanda solar project needs to be completed as soon as possible “because money was paid and the contractor needs to deliver the 100 megawatts as per contract signed with ZPC.”

Also commenting after visiting the Gwanda solar project site in the company of Zesa and ministry officials, Minister Chasi said he was depressed by what he saw regarding progress on implementation  and demanded that the project should be made to produce power as originally envisioned or the money paid be returned.

“I can’t express the level of depression that I am experiencing right now. (A bad) power situation is in the country. I was expecting that some magnificent amount of work would have been done.

“I feel that as a ministry and as Government, this is a big let down and we are now going back to look at this situation. I am aware that there has been litigation; the project owners won; what I need are megawatts. I am also focusing and zeroing in on Zesa itself to understand why there was a delay,” the minister said.

Zesa recently appealed at the Supreme Court against High Court judge Tawanda Chitapi’s ruling in favour of Intratrek and declaring the contract between the parties to be valid and in force.

While Zesa’s appeal is still pending at the Supreme Court, Intratrek recently had its application for execution pending appeal granted with the judge saying action was required on Gwanda given the power situation in the country.

Justice Chitapi added that the parties should spend more time on implementation at the project site instead of merry dancing in board rooms and court of law because the power required was not for Intratrek or ZPC, but the whole country.