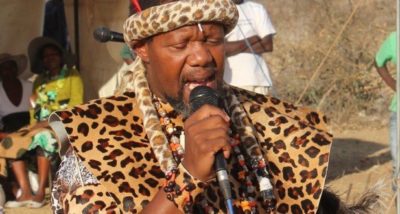 Ndiweni said traditional Ndebele culture allowed traditional leaders to push for a Dabengwa clan chieftainship title in honour of the late national hero, who was buried in Ntabazinduna last week.

On Friday, he told Standardpeople that Matabeleland chiefs would — using traditional norms and customs — push for the Dabengwa chieftaincy through South Africa-based Ndebele King Bulelani Khumalo.

Lobengula was the last Ndebele King after the British Pioneer Column led by Cecil John Rhodes destroyed the Ndebele Kingdom in 1893.

“The process is very simple, as chiefs, traditionally we were elevated by a reigning monarch,” he said.

“We will send our recommendation to the Ndebele King Bulelani Khumalo.

“Traditionally, there is no chief that has never commandeered a regiment, and likewise Dabegwa commanded the troops and it is a befitting honour for his clan to be granted a chieftaincy.”

Ndiweni said Matabeleland chiefs would be sending all the necessary documentation to the Ndebele King, formally requesting Dabengwa’s clan to be conferred with the chieftainship status.

“In the same light, we will send the documentation to Ingwenyama (king) to elevate the clan of Dumiso Dabengwa amongst amakhosi,” he said.

“To join the rank and file of other chiefs, we will seek out a place here in Ntabazinduna where his clan can join the ranks of the traditional leaders.”

The government last year barred Khumalo’s coronation as Ndebele King, arguing the ceremony was illegal since the constitution did not recognise a monarch.

Khumalo, who attended Dabengwa’s burial on June 4, was given befitting honour and respect by Matabeleland chiefs.

Ndiweni said since time immemorial, chiefs have been selected by monarchs.

“When you ask yourself how does a chief become a chief? There is no old chieftaincy that comes from the political arena. Every chief here comes from Lobengula and Mzilikazi,” he said.

“Our jurisdiction was defined by his majesty Mzilikazi and what were the credentials for that?

“The individual must be upstanding and a right person. All these factors were taken to the monarch to say we think this individual can be a chief,” said Ndiweni, adding that after the monarch’s consent, the traditional leaders would then seek the consent of the Chiefs’ Council and other relevant government organs.

Dabengwa died in Nairobi, Kenya, on May 23 en-route to Zimbabwe after undergoing month-long treatment in India.

He was declared a national hero and was buried at his family graveyard in Ntabazinduna.

The post Chief Ndiweni pushes for DD honour appeared first on The Standard.