Chiefs kicked out of Mugabe mansion 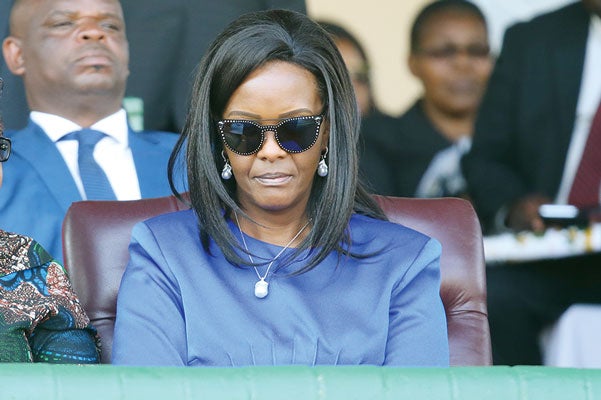 TRADITIONAL leaders from Zvimba were on Friday reportedly kicked out of the late former President Robert Mugabe’s Blue Roof mansion by the ex-leader’s widow Grace as the feud over the final resting place of her husband rages on.

Highly-placed family sources told NewsDay that Grace was livid after it emerged that it was the
Zvimba chiefs led by Chief Zvimba who approached President Emmerson Mnangagwa pushing for Mugabe to be declared a national hero and interred at the national shrine.

“There was a stand-off after it became clear that the chiefs were pushing their own interests and prepared to alter Mugabe’s deathbed wishes not to be buried at the National Heroes Acre, but at his boyhood village in Kutama,” the source said.

The source said the chiefs who had camped at the Blue Roof since Mugabe died early this month were reportedly given their marching orders on Thursday night after a meeting between the traditional leaders, Grace’s sisters and Mnangagwa. They then left the lofty home on Friday morning.

Grace has not set foot at the national shrine where government is constructing a mausoleum for her husband, whose body is still holed up at the family’s imposing mansion in Borrowdale.

She has allegedly refused to let the veteran nationalist’s body lie in state at One Commando Barracks or at private mortuaries, a development which has further strained her relations with other family members.

“What I know is that it’s the Zvimba chiefs who marked that grave (mausoleum) and Grace has not even set her foot there, so clearly that feud is not a lie. The people who have been taking the lead are Zvimba chiefs and they have not been at Blue Roof since weekend,” a government source said.

“If she can’t allow them to keep the body and preferring to stay at home with her dead husband, what makes you think she will let them bury him at the National Heroes Acre where the army and his enemies in government have access?” a close family member asked.

Contacted for comment yesterday, Mugabe family spokesperson Leo said: “Ummm, I am not aware of any stand-off. I am currently at my farm. I hope most of the people have gone back to their homes or farms. As far as I know, there are no changes. We are waiting on the government to finish working at the Heroes Acre,” he said.

Mugabe died in Singapore on September 6 after being pushed out of power in a coup in November 2017, and replaced by his former long-time aide, Mnangagwa.

Shortly before his death, Mugabe reportedly told his close family members that he did not wish to be buried at the national shrine and for his “tormentors” to pontificate over his demise.

On Friday, South Africa’s opposition Economic Freedom Fighters leader Julius Malema visited the Mugabe family home to pay his condolences where he urged Grace to stand firm and resist attempts to force her to defy her late husband’s deathbed wishes.

“We respect the last wishes of President Mugabe and that in our African tradition the words of the deceased cannot be undermined by anyone it doesn’t matter how powerful you think you are,” Malema said.

“If the current dispensation believes in President Mugabe, they should protect his legacy. Part of protecting his legacy is first and foremost respect his last wishes and the wishes of his family.

“It’s an absolute nonsense that you think declaring a person a national hero takes away the right of the family over the deceased. The family, especially the surviving spouse, has got the last word. It doesn’t matter whether you have declared a person a national hero; whether you are doing a State funeral, every little detail of what you want to do around the dead body should be consulted with the family, particularly when we are African and there is a very strong surviving spouse here who is not easily shaken by arrivalists, so they ought to really respect her and respect the wishes of this family,” he added.

The post Chiefs kicked out of Mugabe mansion appeared first on NewsDay Zimbabwe.