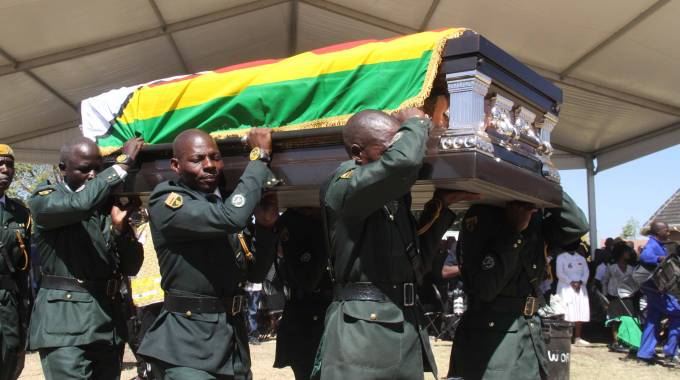 Chiefs from the late national hero Cde Robert Mugabe’s Gushungo clan of Zvimba were conspicuous by their absence during his burial yesterday, amid indications that they failed to agree with the family on burial procedures.

The late former President’s wish was to be buried the Christian way, a development that did not go down well with the chiefs, who wanted him to be buried in a traditional way.

The only notable figures during the burial were Chief Zvimba Beperere (Mr Alfred Tome) and one only identified as Chief Matare.

Addressing mourners at the Mugabe family’s homestead yesterday, Cde Mugabe’s surviving sibling Dr Regina Gata said her brother was a Christian and he deserved to be buried as such.

The burial was presided over by the Roman Catholic Church.

Said Dr Gata: “ As the only surviving sibling, allow me more time to speak. This man lying hear was a true Christian who said, I will live a Christian life and die a Christian . . .

“Let me first make sure that I express my gratitude to His Excellency President Mnangagwa because he listened to the children on their father’s wishes.

“He was on record saying we will follow the family’s decisions, so all these discords, should go where they deserve.”

Family spokesperson Mr Walter Chidhakwa urged chiefs from the Gushungo clan to remain united but not to interfere with family issues.

He said this in reference to the feud between the family and the chiefs.

“As the Gushungo clan of Zvimba we are one,” he said.

“We have Beperere, Mutsedza and Chidziva amongst us. We should remain united, but when it comes to family issues, let us allow individual families to make their own decisions.”