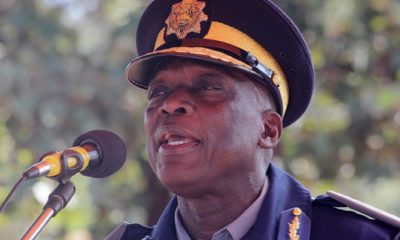 The ex-police boss, believed to be hiding in South Africa after he was hounded out of office during the November 2017 military coup which toppled the late former President Robert Mugabe, has submitted a 25-page dossier to the High Court to defend his properties which are under threat of seizure by the State over allegations of being proceeds of corruption.

He stands accused of diverting US$32 million of public funds to acquire a sprawling family business empire and properties in his 25 years as police boss.

In an affidavit filed at the High Court on Friday, which has opened a can of worms, Chihuri said there was nothing unusual about his wife, Isobel Halima Khan, through her companies, supplying goods and services to the police force as other service chiefs did the same.

“I saw nothing wrong in her (my wife) supplying, as most of the service chiefs’ spouses supplied things, eg Jocelyn Chiwenga supplied ZRP and the army with traffic sleeves, etc,” Chihuri said.

“Marry Chiwenga was a travel agent for government departments and a written instruction was given by the Office of the President and Cabinet for her to supply tickets for the entire government.”

He said a lot of senior officers across the rank and file, including his then deputy Godwin Matanga and wife, supplied “a wide range of vegetables and meat to ZRP amenities”.

“These officers supplied large quantities of beef, chicken, vegetables, fruits and goods according to their ability as a general practice in support of indigenisation,” Chihuri said.

He raised several constitutional questions about the manner in which the National Prosecuting Authority had set about hunting down his assets, and freezing them.

Chihuri said the June 12 “unexplained wealth order” which requires him to prove his innocence against alleged criminal activity violates his right to presumption of innocence until proven guilty, guaranteed by section 70 of the Constitution.

The order was granted by Justice Felistas Chatukuta following an application by Prosecutor-General Kumbirai Hodzi to force Chihuri and his spouse to explain how they acquired their vast empire, which includes immovable properties and companies.

Chihuri, however, claimed he was being hounded by President Emmerson Mnangagwa as part of a protracted fight that started during the liberation struggle when the latter reportedly snatched his pregnant wife.
He added that he was being persecuted for refusing to take part in the November 2017 military coup that toppled Mugabe.

The former police boss said his firms, NodPack, Adamah, Croxile and Mastaw were subject to processes of internal tendering by Matanga, adding that during that time, the Quartermaster (the late Senior Assistant Commissioner Earnest Muchenjekwa) dealt with over 200 companies.

“Why pick on these few if it’s not persecution?” Chihuri asked rhetorically.

He said to prove that he was being politically persecuted, all service chiefs who served under Mugabe were reassigned, except him, with some now serving in Mnangagwa’s administration as Cabinet, ambassadors or permanent secretaries.

Chihuri said his persecution had been extended to his farming business, where his grain was rejected by all Grain Marketing Board depots.

“As an example of the level of persecution is that, in the harvest season of 2017/2018, I took my maize to GMB (Grain Marketing Board) Shamva depot as usual. Four big haulage trucks (gonyeti) were returned with the load of maize to us, GMB citing that was an instruction given from above not to receive our maize or any of our produce.”

He said attempts to take the grain to GMB depots in Chitungwiza and Aspindale hit a brick wall until he ended up distributing it for free.

Chihuri also questioned why there were attempts to seize his upmarket house in Gletwyn built on two adjacent stands, and yet all top service chiefs allocated stands in the area were allowed to consolidate two stands into one.

He said as a result of the sinister motive, current Mashonaland East Provincial Affairs minister Apolonia Munzverengi, a former Senior Assistant Commissioner (SAC) in the ZRP, had grabbed records for the property.

“These records were subsequently grabbed by Ms Apolonia Munzverengi, who is the ex-ZRP SAC, and she is now minister and governor of Mashonaland East province, who claims that this ZRP housing project is hers,” he said.

“She has consolidated two stands in both phase 1 and phase 2 of the project. All this, with the concurrence of Commissioner-General Godwin Matanga, because he wants to get at me.

“We are not the only ones who consolidated two stands and bought more than one stand. Apolonia Munzverengi, our neighbour, put two stands together in both phases one and two.

“Honourable Vice-President Chiwenga has two stands there and also joined two other additional stands to make one stand, which is huge because it was earmarked for a hotel on a kopje.”

“As far as Gletwyn is concerned, my persecutor and tormentor Apolonia Munzverengi is persecuting me because she stole US$77 000 from the project and her runners shared US$23 000. That is the reason why she left the ZRP.”