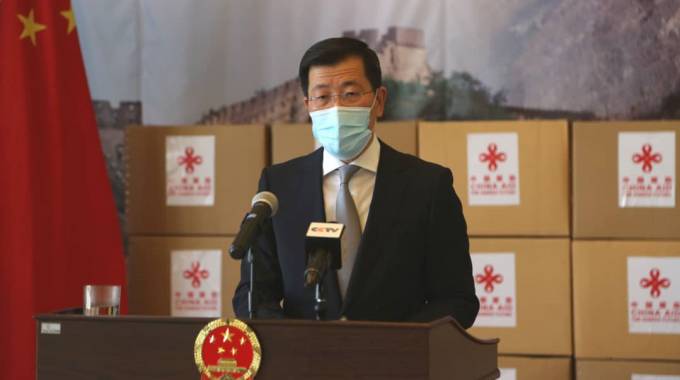 CHINESE businesses are committed to working cordially with Zimbabweans in line with sound relations that exist between the two countries, China’s chief envoy to Zimbabwe, Ambassador Guo Shaochun, has said.

This follows the recent shooting of two workers by their Chinese supervisor following a salary dispute in Gweru.

Speaking at the handover of anti-Covid-19 medical donations from the Chamber of Chinese Enterprises in Zimbabwe (CCEZ) at State House in Harare on Friday, Ambassador Guo said China’s companies operating in Zimbabwe are dedicated to working well with their local counterparts.

“Today’s event is of great significance, demonstrating that China not only fully supports Zimbabwe from the government level, but our business sector is also dedicated to assisting our Zimbabwean brothers and sisters,” he said.

“Another point to mention is that today’s event shows Chinese enterprises have been more and more integrated into the local communities.

“They are here not only for business but also for tiding over the difficult times and building a better future together with their Zimbabwean friends and partners. Like passengers riding in the same boat, they have a stake in each other’s future. That’s why in the face of Covid-19, we support and care for each other like family members.”

Ambassador Guo said the shooting incident was an isolated case and the Chinese Embassy in Harare does not condone such behaviour.

“No matter what had happened to the enterprise before the incident took place, this is not what we want to see. The behaviour of the Chinese employee involved in the case does not represent China, the Chinese government and all Chinese nationals and Chinese enterprises in Zimbabwe,” he said.

Ambassador Guo said any possible illegal acts and persons who violate the law should not be shielded.

“In the meantime, we believe that it is unreasonable to attribute an individual or an isolated case to the Chinese government and all Chinese nationals in Zimbabwe, just as we cannot attribute the illegal acts of foreigners in China to the governments and people of the countries concerned,” he said.

Ambassador Guo said China and Zimbabwe have a long-standing friendship and co-operation and called upon the two nations to safeguard it jealously.

Vice-Chairperson and Publicity Secretary of CCEZ, Ms Shanel Liu, said the organisation is committed to maintaining sound relations with all Zimbabweans.

“Our Chamber is committed to social welfare programmes in Zimbabwe. We support charity initiatives throughout the year. Our member companies also in their individual capacities are actively involved in charity work and social programmes.

“Tianze Tobacco is building schools in rural areas. The company that I represent, Hengshun Zhongsheng, has been sponsoring Presidential Scholarships for the past four years, providing full scholarships to over 150 Zimbabwean students pursuing tertiary education in China,” she said.

Ms Shanel revealed that the first batch of graduates sponsored by Hengshun Zhongsheng returned to Zimbabwe last week and are currently in quarantine.

“Our companies and our Chamber will continue contributing to the overall welfare of Zimbabwean people, and will continue to do our best in future,” she said.

Speaking after receiving the donations to fight the Covid-19 pandemic from the Minerals Marketing Corporation of Zimbabwe (MMCZ) and the CCEZ, President Mnangagwa made it clear that the mine manager would be treated in the same manner as every citizen or resident.