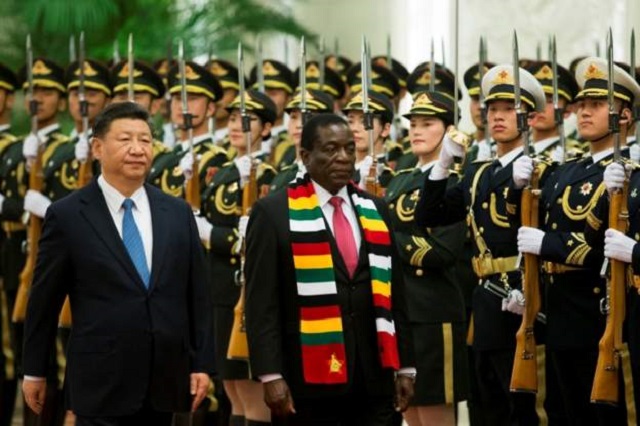 Kuda Bwititi, Harare Bureau
TREASURY is processing urgent paperwork to receive nearly US$2 billion, which is part of a package extended to Zimbabwe by China during President Emmerson Mnangagwa’s visit to the Asian giant a fortnight ago.

In another development that bears testimony the deals are no monkey business, a high-level Chinese delegation is expected in Harare tomorrow to follow up on potential areas of co-operation in the wake of President Mnangagwa’s State visit.

Companies that benefited from the US$2 billion deals last week told our Harare Bureau that exciting times are beckoning as their projects will kick-off after Chinese banks agreed to the immediate release of funds for Hwange Thermal Power Station’s units 7 and 8, Robert Mugabe International Airport’s expansion and NetOne’s Phase 3 extension.

President Mnangagwa’s administration also received special bonuses from President Xi Jinping of RMB1 billion and US$20 million, which will soon go directly into Zimbabwe’s reserves. Documents availed by Treasury last week showed the first tranche of the $1 billion Hwange deal is due any time from now, and they will be implemented over three-and-a-half years.

The expansion of Robert Mugabe International Airport is expected to start immediately, as Finance and Economic Development Minister Patrick Chinamasa had already signed the financing arrangement.

NetOne’s US$71 million expansion is well on course with US$10 million already injected and the remainder on its way. Kunzvi Dam is also taking shape, with China Communication Construction Company (CCCC) and Sino Hydro poised to invest US$400 million.

CCCC is the world’s largest construction firm, while Sino Hydro recently completed expansion of Kariba South Hydro Power Station at a cost of $533 million, adding 300MW of electricity to the national grid.

In an interview with our Harare Bureau last week, Cde Chinamasa said Treasury has initiated procedures to receive the money.

US$ 153 million for Robert Mugabe International and US$71 million for NetOne Phase 3 expansion, I can safely say that these are done deals. We are now just processing the papers to receive the money. What is important is that we reached agreement with China Eximbank and Sinosure, which insures all Chinese investments outside of China.”

According to documents availed from Treasury, other funds destined for Zimbabwe’s coffers include a RMB1 billion (about $160 million) grant which will be available from 2018 to 2020.

This is money that had been set aside for 2015-2017 but had not been paid out for varying reasons. Speaking to our Harare Bureau, ICT and Cyber Security Minister Supa Mandiwanzira, who was part of the delegation to China, said the NetOne Phase 3 expansion was a done deal after it received the highest guarantee possible from President Xi.

“President Xi personally assured the delegation led by His Excellency President Mnangagwa that the fund is now available to Zimbabwe. In order to demonstrate the confidence, Huawei, which is implementing the project, has already advanced about $10 million. That upfront payment is supporting the deployment of infrastructure across the country. The equipment is already now on the seas. The paperwork for the remaining $61 million is being finalised to ensure that the full amount is released.”

“The Chinese President was satisfied with the presentations done by the Zimbabwean President. The two Presidents’ meeting enhanced the confidence of the Chinese President for investment in Zimbabwe. NetOne will increase its competitiveness in the mobile sector through broader network coverage, better data network and value for money products. This project will bring cutting edge data services to some of the marginalised communities enabling them to bridge the digital divide.”

“We are working with China Communication Construction Company, Sino Hydro and also City of Harare for the construction of the dam, a water treatment plant and installation of smart prepaid meters.

“The construction will be done under public-private partnerships. We are looking at around $400 million for the water deal.”

On the envisaged $4 billion stainless steel investment, Mines and Mining Development Minister Mr Winston Chitando said: “Zimbabwe has set itself a strategic objective of having a stainless steel plant in the country. Preliminary discussions with potential players have and will take place over the next few weeks and more communication will be made at the appropriate time.”

“Mr Xiang came to Zimbabwe in 2014 and said Zimbabwe has all the ingredients of making stainless steel within 200 to 300 kilometres of each other.

So he revived the offer to President Mnangagwa who gave him all the assurances that he needs. He is now busy putting together a package for building the largest stainless steel plan Africa has ever known, worth about $4 billion.”

“We are having a Chinese delegation visiting from Monday to Friday, responding to the recent State visit. They are following up to look at potential areas of where they can invest. They have specific interest in the energy sector and infrastructure developments. So we have made appointments for them with Zera and Zesa, and IDBZ.”