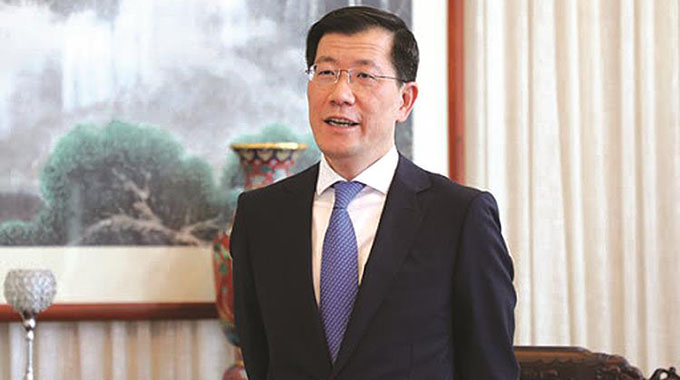 Herald Reporters
China yesterday pledged to donate an additional 200 000 doses of Covid-19 vaccine, bringing its total donation to 400 000 doses with another 600 000 doses bought commercially from Sinopharm expected within a week or two.

President Mnangagwa held a virtual meeting with Chinese Ambassador to Zimbabwe Mr Guo Shaochun yesterday, where the top diplomat announced the news of the gift from President Xi Jinping.

Briefing journalists soon after the meeting, the Deputy Chief Secretary to the President and Cabinet and Presidential spokesperson, Mr George Charamba, said the donation will not only speed up Government’s vaccination programme, but was a reflection of the good bilateral relations between China and Zimbabwe.

“The President has just had a virtual meeting with the Chinese Ambassador who brought good tidings to Zimbabwe. He broke news from his President Xi Jinping to say that the Chinese Government has decided to give us a further 200 000 doses of the anti-Covid-19 vaccine,” said Mr Charamba at State House.

“That brings the total donation from China to 400 000 doses which will cover about 200 000 Zimbabwe beneficiaries. That is a substantial input from China, more so given that it is coming as a donation to Zimbabwe.

“Over and above that, the ambassador also indicated that the Chinese pharmaceutical companies are now in a position to make available the vaccine doses which have been bought by Zimbabwe. You know there is a stampede for that vaccine worldwide and just to have that preferential treatment from the Chinese Government is in itself a major development for our country and of course a very good indication of the excellent relationship between the two countries,” he said.

The one million doses coming as a gift and through Zimbabwe’s commercial order will be enough to vaccinate 500 000 people, all the critical frontline groups most at risk of infection plus a large percentage of the elderly and those with chronic conditions who are most at risk of severe complications and death if infected.

Vaccine shortages are hitting many national programmes around the world as manufacturers ship as fast as they can, with a potential market of around 15 billion doses if the entire global population is vaccinated, and manufacturing countries tend to give priority to their own citizens. Ambassador Guo has already noted that China needs to vaccinate 1,4 billion of its own citizens, but is diverting critical supplies as gifts and commercial orders as part of fulfilling its global responsibilities, with Zimbabwe on the list of initial recipients.

“We have placed an order for 600 000 of vaccines that is expected in the country in a week or so. That will give us an emphatic start to our vaccination programme. But could I also just indicate as well that over and above what the Chinese Government is donating and is making available under our procurement programme that we have agreed with them, there is also a lot of activity to try and secure more vaccines from other quarters and I have in mind what we are doing with the Indian and Russian governments.

“So really, as we move in the weeks ahead we should be able to see the vaccination programme picking up the tempo thereby hastening the pace at which we go back to normalcy in Zimbabwe, getting the children back at school, workers back at work so that we can kick-start our economy in realisation of Vision 2030,” said Mr Charamba.

The national Covid-19 vaccination programme started in all 62 districts with frontline health workers and other key personnel at high risk of infection, getting their first jab.

Government is targeting to vaccinate at least 10 million people against Covid-19 as the absolute minimum to start achieving a degree of herd immunity. So far Covid-19 has killed over 1 440 Zimbabweans and affected over 35 900 people in the country since March last year.

Over 400 people were vaccinated in Bulawayo on the first two days with another 118 in Matabeleland North. Midlands saw 412 frontline workers vaccinated by yesterday, with numbers increasing each day.

Acting Midlands provincial medical director, Dr Reginald Mhene said: “We had 111 frontline workers who got the vaccine on the first day. We also had 301 on the second day and the programme is progressing well with more of our frontline workers receiving inoculation.”

In Mashonaland East, more than 600 frontline workers have so far received their first dose of the vaccine. Provincial medical director, Dr Paul Matsvimbo, said: “When we started the numbers were a little bit low but on Tuesday they started to increase. On the first day we had a total of 196 frontline workers who got vaccinated and the number has so far increased to 608.

“We are intensifying advocacy by using various campaign strategies like peer to peer mobilisation. We are expecting that as the campaign goes on, the numbers will continue to rise,” said Dr Matsvimbo.

In Matabeleland South, the provincial nursing officer Sister Joyce Dube said the programme was continuing with fewer challenges and that between Monday and Tuesday, they had administered the vaccines to 154 people but more have been vaccinated, only mobile phone networks are making it difficult to record all vaccinations.

“We are having low numbers currently because these centres are manned by very few members of staff,” said Dr Samhere.

Masvingo provincial medical director Dr Amadeos Shamu yesterday said: “Our teams are moving in all the districts vaccinating and sensitising our frontline health workers and we are satisfied with the uptake.”

He said more frontline workers including health personnel, the security services and media, were warming up to the vaccine and getting inoculated in numbers.