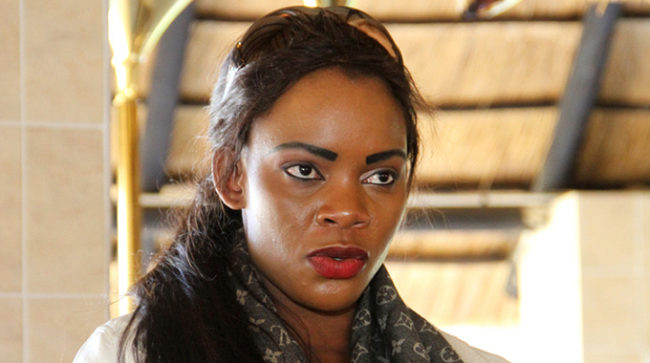 THE estranged wife of Vice-President Constantino Chiwenga, Marry Mubaiwa, has claimed that her husband was dragging her to court on spurious allegations to force her hand on the divorce proceedings currently ongoing at the High Court.

Marry stated in her bail application that some of the issues raised by the former army commander, who is the complainant in the case, where “fabricated and hilarious”.

Through her lawyers, she poked holes into Chiwenga’s allegations, adding that even after June, when she allegedly attempted to kill Chiwenga, the two remained together and the VP actually sent her
US$30 000 for her upkeep in China when she visited him at his request.

“The applicant denies the offence, and specifically incorporates the statement made by her to the police. She will state that the allegations are conjured by the Vice-President in an endeavour to force her hand in the divorce proceedings that are pending in this court,” the application read.

Marry said there was no way she could have committed the alleged crime as at that time, just like now, she was sick and her hands were swollen.

“It should also be noted that the alleged crime happened when she was already physically frail and nursing the injuries of the assassination attempt. One wonders how in such a physical condition she could have managed to drag a whole army general from a hospital bed as alleged by the State. It is difficult to even
imagine the eventuality of this happening and to reconcile that with the fact that the State needs to prove this beyond reasonable doubt makes the charge itself extremely hilarious.”

The lawyers said there was no reason to suspect that she would flee as: “… the applicant is of visible poor health, being visibly traumatised and having lost a considerable amount of weight. A doctor attended to her and deposed to the affidavit.”

Marry, according to the papers, was injured in Bulawayo on June 23, 2018 by a hand-held grenade thrown “with the intention of assassinating the President (Emmerson Mnangagwa)”.

The lawyers argued that Marry was a mother to relatively young children and had no reason to leave them behind.

The application reads: “The primary evidence is said to be a medical report that shows the common cause fact that the Vice-President was in hospital. We are not told that the medical report corroborates the facts alleged by the State. The report is completely and utterly useless to the State. That the Vice-President was ill and hospitalised is a notorious fact.

“We would have expected the State to produce a report from the doctors who allegedly resuscitated the Vice-President. This is impossible because such reports do not exist, for the simple reason that the incident did not occur as alleged or at all. No doctor who respects his professional standing will be made to perjure himself.”

The lawyers said the claim that there was a photograph of a bloodied T-shirt was “laughable”.

The papers also state that even after June when Marry was said to have committed the crime, the two travelled together alone on several occasions.

“Either the State is not telling the truth or Zimbabwe should be seriously worried about the state of security personnel who guard important individuals. The probability that this allegation is a recent fabrication is, therefore, high,” the bail application papers read.

“When he was in China, the applicant’s husband requested the President arrange to have her to be sent to him. He even sent his personal security with US$30 000 for her personal upkeep and use. All this happened after July 2019 and in applicant’s assertion, it is inconceivable that this would have happened that she tried to murder her husband.

“This case is as weak as it is fabricated.”

She is alleged to have attempted to murder Chiwenga while in a South African hospital in June.

The two are going through a nasty divorce process.

Marry was remanded in custody to December 30 by Deputy Chief Magistrate Christen Mberewere on both charges and asked to apply to the High Court for bail.

In her application for bail on the allegations of money-laundering and externalisation, Maryy said: “On the charge of externalising money to China, the State has only evidence of one witness that the appellant will challenge at trial. She will state that the witness would not have any basis to assume or allege that the money was moved illegally nor is the witness telling the truth. The money does not belong to the appellant and, in fact, was money belonging to her husband, who should be the person in the dock, assuming an offence was committed.”

She accused the Zimbabwe Anti-Corruption Commission of being used as a tool in the divorce proceedings.

“… The divorce proceedings were instituted on December 3 and the charges in question relate to events that allegedly happened on or before May 2019, more than six months ago.”