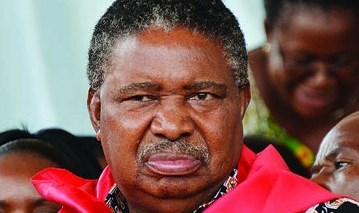 Nanavac chief executive officer, Ramachandran Ottapathu, recently released a statement informing Choppies employees that the Mphokos are no longer part of the business and they should not take any instructions from them.

“Kindly note that…P Mphoko and…S Mphoko do not have a financial or operational say in the business of Nanavac. We strongly request that all employees desist from dealing with the above mentioned persons with immediate effect.

“Any action taken as a result of instructions from the above mentioned persons will be contrary to the Company Rules and Procedures and disciplinary action will be taken against the responsible employee,” Ottapathu said.

However, Mphoko’s lawyer Welshman Ncube said Nanavac cannot make a decision cutting ties with the Mphokos because they own 51 percent of the Nanavac votes.

He said Ottapathu wrote the statement without the board of directors’ consent after the Mphokos held a meeting with employees who were complaining that they were being harassed by Indian expatriates and suspected they were not going to get their bonuses.

“Nanavac cannot make a decision disassociating itself with the Mphokos because they hold the controlling majority vote anyway. They own 51 percent of the shares so it’s impossible for Nanavac to disassociate itself from two people who hold the majority shares.

“The workers at Nanavac were suspecting that they might not get their bonuses and claimed they were being intimidated racially and otherwise by the Indian expatriates.

“They then called for a meeting with the Mphokos to get clarification on these things. The meeting was held to clarify issues on Monday,” Ncube said.

Ncube revealed that the Mphokos had also wanted the meeting to do away with a rumour that the High Court had barred Siqokoqela from entering Choppies shops.

He added that the statement that is in circulation is trying to enforce an unapproved High Court application in which Choppies Botswana had applied to be Choppies’ only owner.

Ncube said Ottapathu had no right to circulate that letter as the High Court is set to make a ruling on the application next year.

“A lie was circulated to say the High Court had barred Siqokoqela from entering the shops in a bid to stop the workers from listening to any of the Mphoko directors which was not true.

“The circular is trying to enforce an order which has not yet been given and is going to be argued early next year,” Ncube added.

The Mphokos have been in a battle with the Enterprise’s Botswana shareholders who want to reclaim 100 percent shareholding of the group by ousting Mphoko whom they claim only owned seven percent of the company.

This comes after his 40-year-old son Siqokoqela allegedly defrauded Choppies Enterprise of $51 000 worth of cash and goods from the outlets in Botswana and is facing 170 counts of theft and fraud.