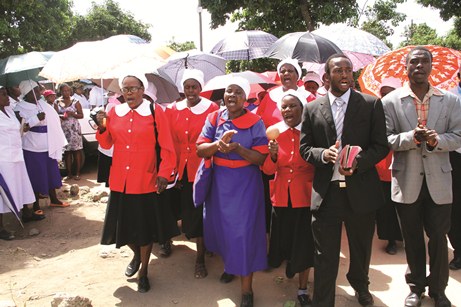 HARARE – The Church has revealed it is willing to commit itself to lay groundwork to break the ice for political dialogue in light of the ongoing unbearable economic challenges in the country.

In its new year statement, the Zimbabwe Council of Churches (ZCC) — an umbrella body for Christian denominations in the country — said it is no secret the nation was fast sliding into the abyss.

The churches said government must address three key areas to avert the “possible catastrophe prophesied in Luke 19 verse 44” which include the deficit of trust and restoration of public confidence, forging a renewed sense of shared national vision and social cohesion and advance an economy that works for everyone.

ZCC secretary-general Kenneth Mtata said there was an urgent need to address the deficit of trust and restore public confidence.

“Many people have a low opinion of the willingness and capability of government and other leaders to resolve pressing challenges due to lack of clarity of communication on the nature of the problems and how they are being addressed,” he said.

Mtata said there is an increased manifestation of selfishness, greed, insecurity, profiteering, rent-seeking behaviour and no prosecution proportional to the rampant cases of corruption.

He further noted there was a clear sense of hopelessness and despondency among the people.

“Many Zimbabweans are suffering, standards of living are falling as people struggle to obtain the basic goods and services required for dignified lives. There is unrest among working Zimbabweans.”

However, as a result, the church said it was willing to break the political impasse through dialogue.

“The Church therefore commits to create a shared space for a collaborative national consensus-building process aimed at creating a space of trust in which all Zimbabweans can shape a new national imagination.

“There is need to forge a renewed sense of shared national vision and social cohesion. We find that there is a lack of consensus on fundamental issues affecting the nation. The underlying tensions pit the rich against the poor, the young against the old, ruling party supporters against opposition party supporters.”

The church appealed for the nation to seek healing and closure from the deep-lying hurts and pains it is currently going through.

Meanwhile, Bulawayo preacher Blessing Chiza has warned Mnangagwa that he is likely to face ouster through mass protests unless he engages opposition leader Nelson Chamisa to find a lasting solution to the country’s on-going economic crisis.

Chiza who leads Eagle Life Assembly Ministries, one of the biggest assemblies in the region in his New Year’s annual cross-over night prophecies at the Zimbabwe International Trade Fair (ZITF) challenged Mnangagwa to heed his prophecy, failure to which uprisings against his rule were imminent.

“I was given verses James 4vs6/ James 4vs17 and the Lord said Mnangagwa must pray and humble himself for the sake of the Zimbabwean people he is leading and have a dialogue with Chamisa for this economy to change, because if there is no dialogue the people of Zimbabwe will continue to suffer. It’s a spiritual thing,” Chiza told thousands of his followers.

“If the presidium does not heed this instruction, I saw Zimbabweans becoming very impatient, and protests that have never been seen in Zimbabwe arising which shall bring the whole nation out and they will send the government resigning because some of the people will not leave the streets demanding food from the president,” he said.

Chamisa has indicated that his party is open for dialogue to find solutions to the on-going crisis though he has refused to recognise Mnangagwa as the president citing a flawed July 31 election process.

Chiza’s prophecy also comes at a time labour unions and the main opposition MDC have cranked up pressure against government, declaring that they will soon unroll nationwide strikes and protests due to the unbearable cost of living currently being experienced in the country.

This week Legal and Parliamentary Affairs minister Ziyambi Ziyambi told this paper that government will deal with opposition parties who are planning to protest this year saying they are abusing the “new found” freedom.

His statement followed that of Zanu PF youth secretary Pupurai Togarepi who promised that they would crush all dissenting voices in the new year.