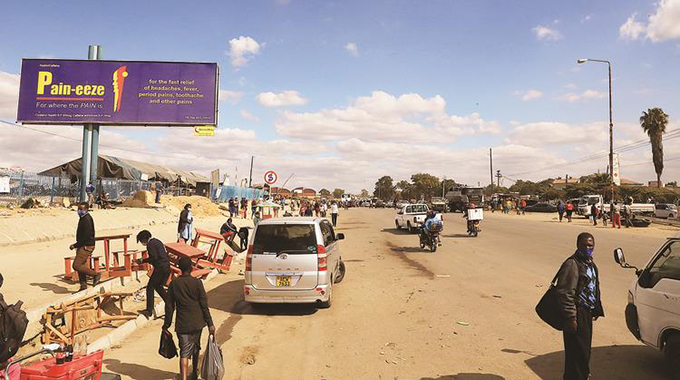 NEW LOOK . . . What used to be a choked Mbudzi roundabout was yesterday left decongested and easier for motorists to pass through after the demolition of illegal structures by Harare City Council. — Picture: Tawanda Mudimu

At Mbudzi roundabout along Simon Mazorodze Road there were at least four Harare City Council bulldozers demolishing illegal structures from where traders were selling foodstuffs, building materials, furniture, garden supplies and even cars among their wares.

Among destroyed structures were tuckshops that were being leased out by Zimbabwe Industrial and Technological Revolutionary Party (ZITER) leader Daniel Chingoma.

Chingoma was left speechless during the exercise just like other traders who were trying to come to terms with their losses.

In Chitungwiza, many illegal structures were destroyed in St Mary’s and Zengeza suburbs. A bus terminus in St Mary’s near Manyame complex, which had been turned into a garage and car park, was also cleared with a council vehicle on standby to tow away some broken down vehicles.

Harare Provincial Development Coordinator Mr Tafadzwa Muguti yesterday said his office would not allow people in the province to continue disregarding the law.

“We can’t develop a provincial economy with lawlessness. Today (yesterday), we removed unregistered tuckshops and other businesses operating along road servitudes,” he said.

Mr Muguti said they had also noticed that officials in the Harare and Chitungwiza municipalities had been fast tracking paperwork for targeted demolition sites.