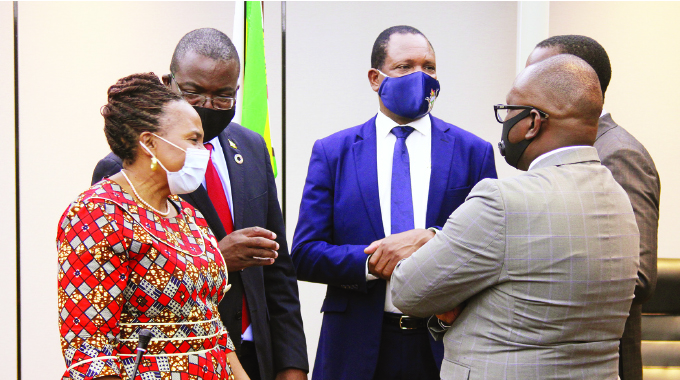 THE Government has increased public sector salaries by 40 percent effective from November 1 this year as part of continued efforts to improve conditions of service for civil servants.

Information, Publicity and Broadcasting Services Minister Senator Monica Mutsvangwa revealed this after yesterday’s Cabinet meeting, saying besides the pay rise for all civil servants, teachers would be awarded a further 10 percent risk allowance.

The latest increase will see the lowest paid civil servant earning $14 528 while the basic salary for a teacher is now $18 237.

“Noting its obligations to pay a decent wage, Government has reviewed upwards, the salary increase offer to civil servants by 40 percent which will be awarded to deputy director grade and below,” said Minister Mutsvangwa.

“In addition to the salary increase, the teachers will also be awarded a 10 percent risk allowance. The new basic salary package for a teacher is $18 237, which is above the Poverty Datum Line (PDL).

“This means that the compounded review percentage of the teacher grade salary is 1 284 percent since the beginning of the year. The lowest paid civil servant will receive a salary of $14 528. This is effective from November 1, 2020,” said Minister Mutsvangwa.

Finance and Economic Development Minister Professor Mthuli Ncube was quick to allay fears of destabilising the success recorded on the macro-economic front.

Speaking at the post-Cabinet media briefing, Minister Ncube said measures had been put in place to insulate the local currency against devaluation and salaries would not be eroded.

Both the official and parallel market exchange rate have been stable in recent months and this has been reflected in stable prices, and in some cases falling prices, of basic goods.

Prof Ncube explained that the success recorded on the macro-economic front was anchored on sound policies which would not be affected by the improved cash flow on the market.

“We don’t expect this to destabilise the current stability. We want to make sure the ordinary civil servant is as close as possible to the poverty datum line,” he said.

He said the idea was to give employees a real wage increase which would not be eroded by market speculators.

Professor Ncube cited policies in place like the tight control of mobile money transfers and the auction system to protect the value of the currency.

Minister Mutsvangwa also gave an update on the teacher pupil turnout following the conclusion of the phased reopening of schools this week.

“Under primary and secondary education, the attendance of learners was 51.8 percent, while that of teachers is 25.7 percent.

“For the final examination classes, learner attendance was 42 percent, while the national average on teacher availability marginally increased from 27.16 percent to 27.77 percent,”

Some teachers had chosen to go on industrial action to push for salary increments but the latest improvements on their salaries is expected to motivate them back to work.

He said they had opposed a return to US dollar salaries which would not be viable for local businesses.