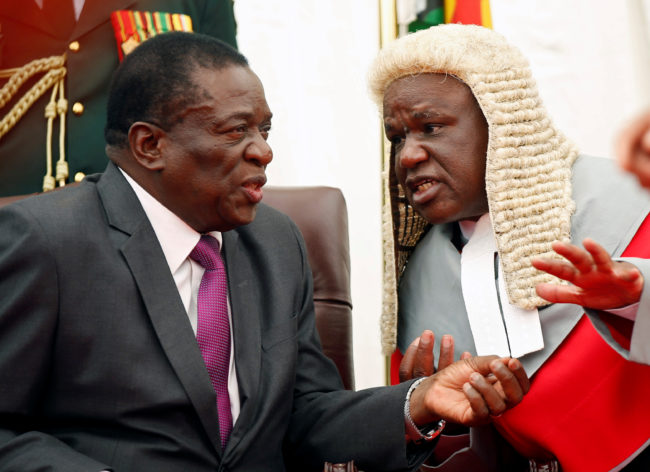 PRESIDENT Emmerson Mnangagwa is today expected to swear in six judges of the Supreme Court from the High Court bench who will be expected to preside over the government’s appeal against a ruling by the lower court nullifying the extension of Chief Justice Luke Malaba’s term of office.

The move is seen as a ploy by Mnangagwa to use the carrot and stick strategy on judges to secure a favourable judgment on Malaba’s appeal.

In his application, Chingwe, who is represented by the Zimbabwe Human Rights NGO Forum, sought a relief that the respondents in the matter should adhere to section 180(4) of the Constitution before the appointment of the Supreme Court judges to enable persons who are not sitting judges of other courts to be considered for such appointments.

“The second respondent (Mnangagwa) recently appointed five judges of the Supreme Court to the Constitutional Court and in the process created at least five vacancies to the Supreme Court,” Chingwe stated.

“I am also aware of a former judge of the Supreme Court, who was also dismissed and in the process creating an additional vacancy there. Therefore, I have a well-grounded apprehension that the respondents are in the process of appointing candidates for the Supreme Court to the exclusion of a whole class of persons who qualify for such appointment.”

He argued that there was no hurry to appoint Supreme Court judges as the country is endowed with capable acting judges sitting in the court.

“If any appointment is made prior  to the granting of either the interim relief I seek or the final relief, I believe I have also made out a case that such would not render this matter fait accompli (presumably irreversible) and the appointments will be null and void, with the court being entitled to set them aside on these papers. There is, however, no warrant for the court to allow a clear illegality to proceed without being arrested.”

Justice Chitapi will hear the matter tomorrow at 1pm after directing parties to file their pleadings yesterday afternoon.

But Mnangagwa is proceeding to appoint the judges before Justice Chitapi rules on Chingwe’s application.

Most of the High Court judges were not cited when Zimbabwe Human Rights NGO Forum executive director Musa Kika won an order to stop the extension of Malaba’s term of office by five years.

Mnangagwa’s move has raised suspicion that he wants his preferred bench to deal with the Malaba case.

Malaba’s matter has nearly paralysed the country’s judicial system as he wants to have his term extended based on Constitutional Amendment No 2 Act.

However, the High Court led by Justice Happias Zhou last month ruled that the extension of the term of office of the country’s top judge by five years was illegal.

Malaba’s term of office ended a fortnight ago after the High Court ruled that he had ceased to be the country’s top judicial officer on May 15, the day he turned 70.

Justice Zhou ruled that the recent constitutional amendments did not apply to Malaba.

Last week, Malaba resumed his duties on the belief that the High Court ruling had been suspended by an appeal filed by Attorney-General Prince Machaya and Ziyambi.

However, Kika, who challenged the extension of Malaba’s term in the initial case, disputed that an appeal against a declarator suspended the operation of a judgment.  He then asked the courts to find Malaba in contempt and to jail him for six months.

Malaba filed his response on Tuesday, saying he legally resumed his duties following the appeal filed at the Supreme Court by Ziyambi and Machaya against the initial ruling.

The Chief Justice said Kika failed to interpret the law, adding that the rights lawyers’ application was not based on a good cause as the process that led to his appointment by Mnangagwa was not set aside.