THE spectacular collapse of the Zimbabwean dollar in the past week has yet again exposed the government’s bankrupt currency policies worsening the country’s deepening economic crisis. 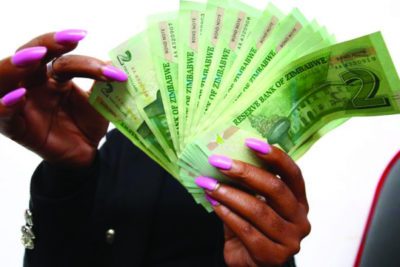 The Zimdollar has weakened considerably since the government scrapped the multi-currency regime, making the local unit the sole legal tender through Statutory Instrument 142 of 2019. The Zimdollar was trading at US$1:ZW$70 this week after the introduction of the ZW$10 bank note. Prices of basic commodities have skyrocketed despite a moratorium by the government on the price of such products.

This has prompted the Reserve Bank of Zimbabwe (RBZ) to accuse mobile money platform EcoCash of fuelling illegal currency dealings on the streets. The central bank closed a number of EcoCash agent accounts, prompting a legal showdown with the Econet Wireless subsidiary who appealed against the move. EcoCash, however, lost the case this week.

This is not the first time fiscal and monetary authorities have taken measures to try and stop the haemorrhaging of the Zimdollar. The RBZ has also suspended several accounts suspected of fuelling trading on the parallel market including that of Sakunda Holdings owned by a close ally and adviser to President Emmerson Mnangagwa, Kudakwashe Tagwirei.

Finance minister Mthuli Ncube suspended the fungibility of Old Mutual, Seed Co and PPC to halt the weakening of the local unit in March this year.
The measures have however failed to stop the rout of the local currency against the greenback. The free-fall of the Zimdollar is hardly a surprise. The local unit was introduced without vital benchmarks being met.

The conditions needed for de-dollarisation and use of a fully-fledged currency include attaining a sustainable gross domestic product (GDP) growth rate of at least 7%; low and stable inflation; reducing the high debt ratios to very low and sustainable levels; increasing the level of savings and investments to at least 25% of GDP; reducing the balance of payments and at least six months import cover.

The decisions by the fiscal authorities to suspend accounts and stocks are an exercise in futility, according to economist Prosper Chitambara.
“What government is doing will not work and it does not send the right signals out there. That is the challenge. What is needed is market-based reform,” Chitambara said.

He said since there is nothing to anchor the local currency, it remains vulnerable to speculative attacks by rent seekers.
The confidence in the government’s currency measures took a knock when Ncube announced a floated exchange rate, abandoning the strict regulation of the exchange rate. However, this was short lived as the government then turned around to fix the exchange rate at 1:25, which has created a platform for arbitrage and rampant corruption.

“The fixing of the exchange rate has benefitted those people who are politically connected who are taking advantage by getting US dollars at the fixed exchange rate of 1:25 and then going to the parallel market to sell it and making a huge profit without breaking a sweat,” Chitambara pointed out.
The government’s currency reforms have also caused confusion on the legal front in terms of computation of value. The fiscal and monetary changes that were announced by the RBZ on October 1, 2018, on money transfers and conversion of account balances into Real-Time Gross Settlement (RTGS) balances were nullified by the High Court in a judgement delivered recently.

The ruling was made in a matter where Penelope Douglas Stone from The Stone/Beattie Studio, represented by prominent lawyer Tendai Biti, who is also the country’s former finance minister, took CABS, the RBZ and Ministry of Finance to court over a US$142 000 deposit. In nullifying the RBZ directive, Justice Happias Zhou said CABS, which was in a contract with Beattie and Stone, should honour its obligations to customers by paying the money in United States dollars.

Justice Zhou was scathing in his judgement.“This makes the Exchange Control Directive not only arbitrary and irrational, but fail the test of reasonableness. The decision is an incursion of vested rights. No reasonable person who had applied his or her mind to the matters in question would have taken the decision which has the effect of eroding a person’s investment or savings in this manner,” he said.
The government has appealed the ruling.

This in stark contrast to a Supreme Court ruling on issues relating to currency in January this year declaring that a debt owed in United States dollars incurred on or before February 22, 2019, should be discharged in local currency at the 1:1 rate.

The ruling was delivered in favour of Zambezi Gas Zimbabwe (Pvt) Ltd in a matter involving NR Barber (Pvt) Ltd, which was owed more than US$3 885 000 by the gas company before February 22, 2019, the effective date of Statutory Instrument (SI) 33/2019.

The confusion will further hamper investment, which has already dwindled from US$717 million in 2018 to US$259 million in 2019, according to business consultant Simon Kayereka

“From a business point of view, this see-saw battle does not inspire confidence,” Kayereka notes.
“Because of these judgements, the investor will be sitting on the fence, worrying about the safety of what they have invested. The impact of this confusion is that we will have very little in terms of investment inflows. Why should one lose their hard-earned United States dollars for bond notes which have no store of value?”

RBZ governor John Mangudya told a parliamentary committee that the deterioration of the Zimdollar could largely be traced to a lack of discipline by economic players and he be likened it to the impact of the coronavirus scourge that has resulted in hundreds and thousands of fatalities worldwide.

However, Zimbabwe National Chamber of Commerce chief executive and economist Christopher Mugaga has a simpler explanation to that of Mangudya.

The post Clueless gaze in the face of free-falling Zimdollar appeared first on The Zimbabwe Independent.