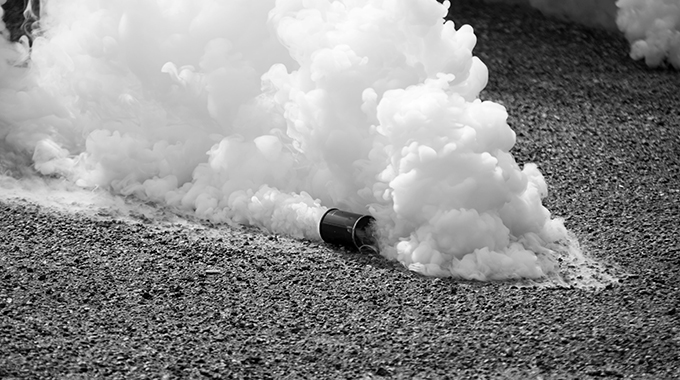 Seven police officers, who threw teargas cannisters into a bus full of passengers at the Harare Exhibition Park yesterday afternoon, now have to account for their actions with one officer identified as having thrown a cannister already under arrest.

Passengers aboard a Rimbi Tours coach had to jump out through the windows with some falling hard on the tarmac. Some were injured as they fell while others will need to be checked for possible internal injuries.

Police had stopped the bus to question and possibly arrest the driver on allegations that he had no driver’s licence and had quarrelled with passengers.

Tear smoke is usually used to disperse violent or potentially violent groups in the open air, the objective being to make the group break up and those involved run away. It is not usually used in confined spaces or where those affected are basically innocent bystanders. In this case the police wanted to question just one person, the purported driver.

Police say they had information that the person in the driver’s seat had no Class One licence before asking him to open his window. When the driver resisted, a police officer then threw tear smoke cannisters into the bus.

It is not yet clear if the police officer had been instructed by superiors to do so.

In a video clip that went viral on social media yesterday, a group of seven police officers was seen blocking the yellow Rimbi Tours bus that was enveloped in smoke. The area is a major bus stop for passengers wanting to catch a bus for the western areas.

A police branded Datsun Go vehicle was seen parked behind the bus while a Mazda B18 single cab truck was blocking the bus in the front.

The seven officers were seen pushing and shoving passengers while men and women were jumping out of the bus through windows.

Police officers in the Datsun Go just drove off when large numbers of people intervened. People could be heard grumbling while others were shouting at the police in protest.

National police spokesperson Assistant Commissioner Paul Nyathi confirmed the use of tear gas saying one officer who was seen throwing a tearsmoke cannister had been arrested.

“I can confirm the arrest of one officer for deploying tear smoke on passengers seated in a Rimbi Tours bus this afternoon at Harare Showgrounds. Investigations are ongoing and more are likely to be arrested, depending on their roles in the commission of the offence,” he said.

“We will leave no stone unturned and even the commanders of that team must explain their cases. No one is above the law,” said Asst Comm Nyathi.

Asst Comm Nyathi said the officers will be charged, both under the Police Act, and in terms of the Criminal law.

But the purported driver’s alleged offence will not be overlooked in a separate investigation. “We have instructed the command in Harare province to take action against the officers,” he said.

However, Asst Comm Nyathi said the bus crew should explain why the bus was being driven by someone without the required licence. “We understand someone who is not licenced to drive was driving the bus and full scale investigations will cover the police officers and the bus crew,” he said.

Rimbi Tours director Mr Decent Rimbi could not explain why his bus was possibly being driven by someone without a Class One licence.

He however, condemned the police officers’ heavy-handedness saying they could have used other and safer means of arresting the driver.

“We got information that police officers asked the driver to open his window and he resisted. The person who was driving the bus is a Class Two driver. After the resistance, we had police then deciding to use tear smoke.

“I feel the police were too harsh on the driver to an extent of harming innocent passengers. Some passengers have asthma or other problems that are affected by teargas, hence the action taken was unwarranted.

“From my understanding, traffic offences do not warrant such actions. If the driver does not have relevant papers, he is arrested and barred from driving.

“If the problem lies with the bus’ paperwork or fitness, it can simply be impounded. Tear smoke was not appropriate under the given circumstances,” said Mr Rimbi.

He however, urged bus operators to comply with police orders and the law.

“As an association, we condemn the act because tear smoke cannot be used on people who are not violent, worse still those confined in a bus.

“We work with the police and if a misunderstanding arises, it must be settled in a civil way,” he said.

Mr Chibage urged operators to comply with the law and to respect traffic officers on the road.