Cost of living goes up again 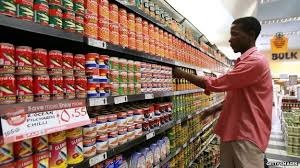 HARARE – Zimbabwe’s cost of living has increased again due to the prevailing economic conditions, the Consumer Council of Zimbabwe (CCZ) has revealed.

This comes after a tax increase on electronic transactions, cash and fuel shortages as well as price hikes, among other challenges, have caused retailers to persist in pounding the economic burden on families, causing distress throughout the country.

Besides, consumers have also been foiled by the three-tier pricing system which has further eroded the wage value, depreciating consumer buying power.

“As CCZ, we assume that the increase in the total figure of the basket can be attributed to fuel prices which have gone up, cash shortages, high demand for basic goods, low supply of goods from most manufacturers, tax increase on electronic transactions (2 cents per every dollar).”

Zimbabwean consumers have remained in the grip of looming economic challenges which have also devalued the standard of life, while every electronic transaction above $10 attracts tax.

In addition, currency distortions which coil the three-tier pricing system have also continued to pound consumers.

CCZ also added that almost all products in the basket (food, soaps and detergents) have increased.

Slight decreases were recorded in onions and tomatoes.

A survey in several retail shops by the Daily News crew showed that cooking oil among other major commodities is missing from most retail shops.

This, according to CCZ executive director Rosemary Siyachitema, “will cause consumers to turn to the black market,” which demands a heftier three-tier pricing system.

CCZ’s basket trends from January 2017 to November 2018 show that the major climb ensued from September, when fuel shortages and price hikes started.

Due to low levels of production, retailers have been forced to import most basic goods that range from cooking oil, soap and wheat for bread.

The cash-strapped government has failed to secure the much-needed foreign currency for inputs causing retailers to look elsewhere.

This has persisted price hikes at parity with black currency market rate.