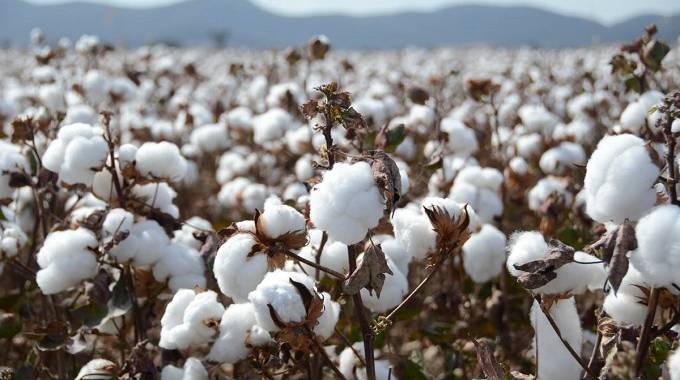 Zimbabwe’s cotton selling season started on May 18 with the gazetted price at $85 per kilogramme.

While deliveries have started trickling in, contractors are in a quandary over the price, which they argue is not economically viable.

Banks are also reportedly not prepared to provide loans, as they view this an untenable.

The price — at $85 — is considered to be just above US$1 using the official exchange rate, which arguably makes Zimbabwe the highest paying country.

The Ginners Association of Zimbabwe had proposed between US30c and US35c.

On the New York Futures Exchange, the price for lint is US85c per kg.

Last year, Zimbabwe pegged the price at $42 per kg plus US$10 per bale, which was way over the average regional price.

This resulted in several merchants struggling to pay.

Most buyers, including Cottco, ended up paying using household commodities such as groceries.

Still, farmers are collectively owed in excess of $1,5 billion for unpaid deliveries.

Government has since promised to pay off the outstanding amount.

“No company will be able to pay that price, meaning the Government should come up with a subsidy to avoid a chaotic marketing season,” a top industry official said.

“What is also critical to note is that ginners are providing free inputs, which is a subsidy being met by merchants, and a price of $85/kg somehow defies business logic.”

Chief director (communications) in the Ministry of Finance and Economic Development Mr Clive Mphambela told The Sunday Mail Business that “conversations around that (subsidy issue) are ongoing”, but acknowledged there might have been “certain aspects that have been overlooked” in coming up with the price. With the producer price set at even above global lint prices, this will perpetuate last year’s problem, analysts have warned, and could decimate farmers’ confidence.

“We cannot continue having a situation where you announce a price and fail to deliver,” said Maxwell Chiramba, a beneficiary of the Presidential Cotton Inputs Scheme.

“We are still owed a lot of money from last year’s deliveries and we hear that the merchants have already indicated that they are unable to pay the gazetted price.”

Cotton Producers and Marketers Association chairperson Mr Stewart Mubonderi said the Government should assure farmers that the subsidy was available.

“We understand the situation that ginners are in but obviously we would like to believe that when the Government announced the price, they had done adequate consultations on the issue of the subsidy,” he said.

Zimbabwe’s cotton production had been on a recovery path since 2016 when the Government introduced the free cotton inputs scheme.

Many farmers are not willing to farm the crop largely because of low prices and poor agronomic support.

Cargill, which had more than 20 000 farmers under its contract scheme, closed in 2014, saying it had significantly suffered from low cotton output, depressed margins as well as high levels of contractual breaches by cotton growers.

Output steadily rose from 28 000 tonnes in 2015 — the lowest in more than two decades — to reach 144 000 tonnes in 2018 on the back of the State-assisted scheme. Back-to-back droughts, however, saw production declining in the following two seasons.

Newer Post
Mugabe exhumation and the legend of Chief Zvimba
Older Post
Bulawayo has highest typhoid cases in Zim: WHO