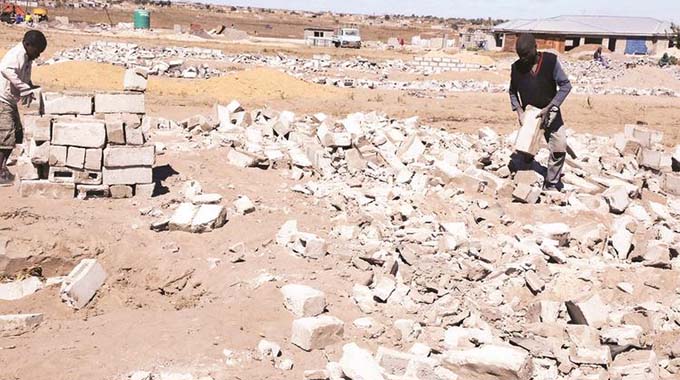 People salvage what is left after their structures built along the Harare Chitungwiza railway corridor were demolished in Waterfalls, Harare, last week

The exercise started last week and more demolitions are looming as council is seeking a court order to raze houses within the range of the railway corridor.

Construction of the railway line was mooted in 1986. The railway line is supposed to run parallel to Seke Road from Chitungwiza right into Harare’s central business district.

Scores of affected residents in area between Mainway Meadows phase 1 and phase 2 were on Friday counting their losses with some gathering bricks and other building materials that had not been damaged during the demolition.

Harare City Council spokesperson Mr Michael Chideme said the demolitions were carried out on developments that were illegally constructed along the Harare-Chitungwiza railway reserve.

“Those who built houses within the railway reservation will be removed through a court order since there are already people residing in the houses,” he said.

“The people in the surrounding area were happy and encouraged the city to evict all the illegal settlers. The land is a reservation hence the settlers could not have bought the stands legally.”

One of the affected residents and a mother of four who only identified herself as Mai Tinotenda said they were allocated the stands by land barons.

“We were allocated the stands sometime last year. The politicians we paid promised to regularise our houses, but we were shocked to see a council bulldozer demolishing our houses and we were told the land was reserved for a railway line,” she said.

Zimbabwe National Organisation of Associations and Residents Trust, Mr Shepherd Chikomba said this was devastating to the unsuspecting residents who were allocated the land and defrauded by unscrupulous land barons.

Harare Residents Trust director Mr Precious Shumba said the City of Harare should not be selective in its application of the law on land developments.