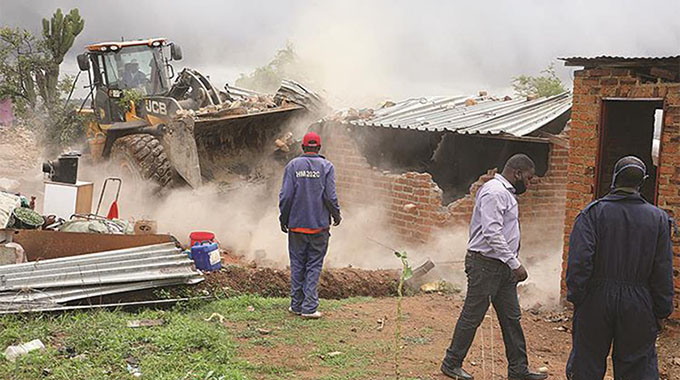 Blessings Chidakwa
Municipal Reporter
The recent Budiriro demolitions carried out by Harare City Council workers acting under a court order almost two years old were legal, but had nothing to do with the Government.

Harare Provincial Development Coordinator Mr Tafadzwa Muguti said it was regrettable that the implementation of the court order was delayed and the demolitions were being done in the middle of the rainy season.

Mr Muguti is now assembling humanitarian aid, including tents for the homeless families, and wants the land barons involved to refund the US$2 500 each of the more than 190 stand buyers paid, either voluntarily or through a civil action in the courts.

More than 190 houses illegally built on land earmarked for a school were demolished last Tuesday, which Mr Muguti said was legitimate, although served at a bad time because of the legal delays.

But MDC-Alliance leader Mr Nelson Chamisa immediately started trying to score cheap political points through misinformation on the demolitions, which were carried out at the behest of the city council, which is dominated by his party.

Mr Chamisa even visited the area to try and pacify the angry residents who would not buy the claim that council was not involved in the demolitions.

The irate residents told him that clearly marked council vehicles and uniformed employees were at the scene supervising the demolitions.

He felt much of the resulting problems were due to the delays in the court process, the long notice period, and then the long delay in enforcing the judgment.

The application for eviction was made while stands were still being sold and before building started.

“As it stands, court applications were done in March 2017 and the courts took too long to order the immediate removal of these land barons,” said Mr Muguti.

The sheriff was instructed on February 13 this year to implement the judgment at which point the country went into Covid-19 lockdown, said Mr Muguti.

“The sheriff resumed work and notice of ejectment was served on November 17, 2020. The responsibility lies with the applicant and respondent to settle their issues the legal route,” he said.

“In this case, all 38 housing cooperatives did not appeal judgments and some did not even defend summons. They ignored them.”

Mr Muguti reiterated that the Budiriro homes were illegal structures as Events Housing Cooperative sold land earmarked for a school without authorisation.

“They sold each stand for US$2 500 and pocketed the money,” he said. “This was between 2017 and 2018 and the buyers were misled. This housing cooperative should refund fully all their money. If they don’t, civil action should commence.”

“This is in the Urban Councils Act,” he said. “If you build illegal structures, the courts can judge in favour of council.”

Mr Muguti rubbished reckless statements issued by MDC-A against himself and Government, saying they were making frantic efforts to assist the affected families.

“The statements are irresponsible as they (MDC-A) have the majority of councillors in council,” he said. “This shows a serious lack of leadership and professionalism. It is simply a legit court order served at the wrong time; the rainy season.”

Mr Muguti said as a temporary measure, the Government would provide tents to those affected by the rains.

He said Harare City Council had close to 38 judgments which were issued over land invaded by housing cooperatives. People rebuild their houses after they were destroyed by Harare City Council officials in Budiriro last week. — Picture :Justin Mutenda

“This means thousands of homes are sitting on illegal land, illegally built and with no approved plans,” he said. “This means there is no water, sewer systems, roads and power.

“People were supposed to have a general understanding of the law and by-laws and respect them as nobody was above the law.”

Some of the affected residents who spoke to The Herald yesterday said they were caught unawares and claimed a wrong court order was used to demolish the houses.

“I belong to Tembwe Housing Cooperative, but council officials came here brandishing court orders in respect of Events Housing Cooperative,” said one of the settlers who declined to be named. “We were not supposed to have been affected by the demolitions.”

It was not clear yesterday if Tembwe Housing Cooperative was not one of the 38 cooperatives affected by the demolition orders issued by the courts.

Other residents were in defiant mood, saying they would not move from the area as they suspected that corruption was at play.