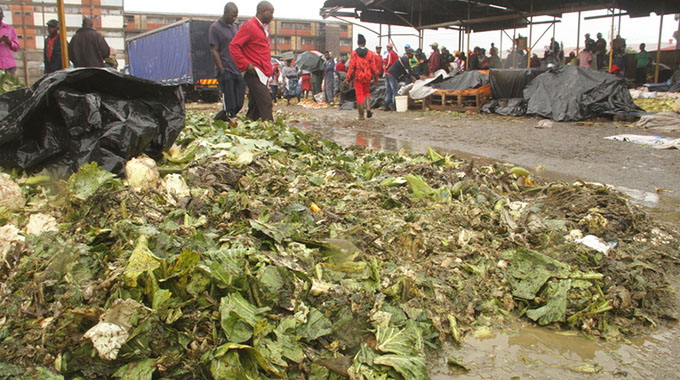 Obert Chifamba Agri-Insight
FARMERS selling fresh produce at Mbare Musika are literally spending hours plodding in pools of foul-smelling mud every day because the concrete floors to the marketing sheds were last cleaned a long time ago.

The situation at the market has everything it takes to ignite an outbreak of typhoid or even cholera as dirt from rotting farm produce, fruits, food leftovers and other perishables is mixed with mud by millions of booted and sometimes bare feet that tread on the floor daily.

It leaves one wondering whether Harare City Council, the local authority that collects $30 levies from farmers daily ever spare a moment to think about their welfare or they just want their hard-earned cash and nothing else.

To start with, farmers go to the market usually a day before and sleepover since business starts as early as 4am the following day. This is where their ordeal begins, as they do not have anywhere to sleep. Farmers that spoke to Agri-Insight said they sometimes sleep in trucks or in sheds at the market.

Some even sleep on shop verandahs and have to part with $3 to use toilets within the market premises.

What boggles the mind is why the council does not seem to appreciate the role farmers play in making the multi-million-dollar Mbare Musika economy tick and accord them a bit of decency in the process of doing their business.

There is no harm in building low-cost lodgings with running water for the farmers who have been doing business with council for many decades now.

In fact, they are one sure source of money for council everyday. Council must be considerate in the way it treats farmers and show appreciation.

The city’s public relations department recently said they have Carter House for farmers to use when they come to sell their produce the following morning, adding that they only have a few rooms that need beds and refurbishment.

It seems the Carter House option has not been well marketed to the farmers, most of whom professed ignorance of its existence when Agri-Insight asked why they were not taking up the option while some said they preferred a place close to the market where they can also guarantee security for their produce.

On one hand, most farmers have expressed concern over the hours they are accorded to do business.

They start trading as early as 4am and close shop at 11am although they are sometimes granted an additional hour to continue trading after which they have to pay another $30 to allow their unfinished goods to be stored and sold the following day.

Council could help the farmers’ cause by extending business hours so that the produce does not lose quality under storage, as most of it is horticultural in nature and needs to be sold fresh hours after it has been harvested.

Despite assurances by council that there are enough municipal police officers on the ground every time at the market, farmers claim that they continue to lose produce, which they fail to trace as city employees are not willing to do anything else other than just collecting their levies.

Some farmers suspect a collusion between the council workers and unscrupulous middlemen, amid claims that the way council has crafted the trading timetable enables middlemen to buy produce for a song from farmers desperate to dispose it and go home to avoid spending another day.

The middlemen later sell the produce to retailers at inflated prices, making more profits than the farmers.

The simple question is: “What is stopping the City Fathers from employing a system that effectively rules out the middlemen and leave the farmers to do their business freely?”

It is also suspected that middlemen sometimes mobilise or threaten potential buyers from the retail sector against buying produce from farmers so that they can later get the produce and sell it themselves.

There is also nothing stopping council from introducing an identification system or anything that rules out the possibility of anyone without those credentials from selling produce within the precincts of the  market.

Ironically, the middlemen that buy or grab produce from the farmers later sell it within the market precincts, but do not pay even a dime to do so.

Maybe, it is time City of Harare orders its municipal police to flush out anyone found selling fresh farm produce at the market without some accreditation of some sort to make sure farmers get enough space and time to do their business and get the true value of their produce.

The farmers’ woes essentially start when they hire transporters to ferry their produce to the market and the latter quote charges that are high, citing the bad state of roads and high fuel prices, which effectively means that the farmers come to Mbare just to dispose of the produce and go back empty-handed.

Farmers also need to explore the option of cultivating local markets and cut on the costs of travelling and just sell to consumers from their communities or consider engaging buyers who can do bulk purchases from the farms.

The farmers need to do organised marketing and cut on unnecessary expenses that eventually erode their revenue leaving them poorer or even in debt, a situation that is not healthy.