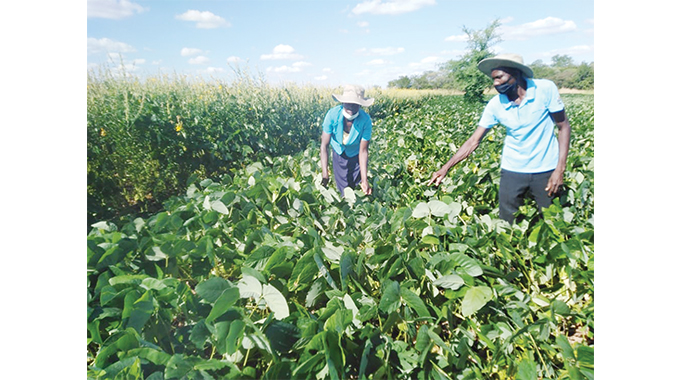 Mr Nambikwa Ncube (46) and his wife, Ms Irene Zulu (41) from Jambezi’s Ward 7 in Chikamba Village under Chief Shana only have seven donkeys and an equal number of goats but decided to venture into fodder production on their piece of land to complement Government programmes to revive the national herd. The couple was voted best farmers in Jambezi by Agritex and held a field day last week.

Crop and livestock farming is less viable in Hwange because of low rainfall patterns, terrain and the presence of wild animals.

Besides two maize plots and sorghum which the family planted under the Intwasa climate-proofed Presidential Input Scheme introduced by Government last year, the couple also planted half-a-hectare each of banner grass, velvet beans, sun hemp and forage sorghum which are all fodder. They also planted millet for seed production and sunflower to feed chickens and produce cooking oil for household consumption. Mr Ncube said he lost a whole herd of cattle to suspected thieves close to a decade ago and decided to keep donkeys.

“I only have donkeys and goats but decided to grow fodder after I realised that between October and November people lose cattle due to shortage of food and water. People travel to other areas to buy stock feed and I saw a business opportunity in this. I will also be able to feed my donkeys so that they are strong for draught power,” said Mr Ncube.

Over the years he had been growing maize, sorghum and cow peas before getting fodder seed from Agritex and Easi Seed last year. Mr Ncube said he wants to tap into opportunities brought by Government through programmes aimed at capacitating farmers and transforming communities from being subsistence to commercial producers.

“There is money in agriculture and local farmers can also save money and their livestock from drought. We have been experiencing recurrent droughts and it is best that we diversify and grow fodder for our livestock to complement some Government programmes aimed at cushioning us,” said Mr Ncube.

He said he was elated to be voted the best farmer in Jambezi and encouraged the community to embrace the concept and also to follow instructions from Agritex officers. A bale of fodder, usually weighing one kilogramme, is sold for between US$2,50 and US$3. Ms Zulu said her wish is to grow fodder through irrigation as she hopes to improve her family’s livelihood.