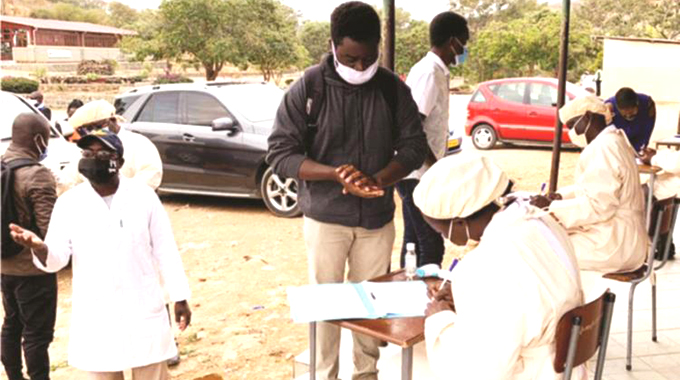 Farirai Machivenyika Senior Reporter
As Great Zimbabwe University re-opened its doors yesterday to final year students, a new programme to train teachers and other frontline workers in the education sector on preventing Covid-19 was announced.

This is the second university to allow final year students to return after Chinhoyi University of Technology let in its first batch of final years on Friday last week.

Great Zimbabwe arranged with Zupco to start moving its students to the university yesterday. All students were interviewed on arrival, according to university spokesperson Anderson Chipatiso, to assess their risk of exposure to Covid-19.

All returning students have to follow social distancing rules and wear masks outside their room. The university has rearranged desks and other furniture to ensure social distancing is observed in lecture halls,  seminar rooms, dining facilities and everywhere else on campus. Students will have their temperatures scanned frequently and all visitors are banned.

All universities are permitted to re-open for final year students once they have fulfilled minimum safety conditions. Permission for other students will be granted once health authorities are satisfied that the increase in numbers will not significantly increase the health risk. With only final years, numbers are low enough to make social distancing and other measures simple to implement and manage.

Teachers who will be involved in the return of examination forms to schools are set to undergo training during the next two weeks on how to minimise health risks and prevent Covid-19 infection.

Under the educational policy, schools will re-open classes in phases starting with this year’s forms sitting public examinations. The second phase will be next year’s public examination forms. Most pupils write public examinations in November and need intense teaching in their final few months to fulfil their full potential in the exams.

However, a far smaller number will be writing mid-year and the Zimbabwe Schools Examination Council has set O-Level and A-Level examinations over three weeks starting on June 30.

According to a memo written by the Permanent Secretary in the Ministry of Primary and Secondary Education, Mrs Tumisang Thabela to provincial education directors, the training should be completed by June 24.

The training is mainly for school heads, teachers of examination classes, school health coordinators and invigilators and will be done according to standards set by the World Health Organisation.

Mrs Thabela could not give further details on the training and only said: “We are planning to do that.”

“This is what we have been proposing all along and it is all part of the preparations towards the re-opening of schools.

“It is a pro-active way of preparing for the re-opening. The training does not mean schools are re-opening because we believe that more should be done to ensure the safety of both teachers and pupils,” Dr Ndlovu said.

“We have made our position clear that there should be minimum conditions that should be in place before we consider re-opening of schools.

He added that there was no need to rush the sitting for the June examinations if the minimum conditions had not been met.

Last week the Parliamentary Portfolio Committee on Primary and Secondary Education advised against re-opening of schools in June saying necessary precautions were not in place, such as running water at all schools, protection for teachers and pupils, and temperature scanners at all schools. The committee criticised the plans of the Zimbabwe School Examinations Council (Zimsec) for setting examination dates for the of this month saying no minimum standards as set out by the World Health Organisation had been met.

Ms Priscilla Misihairabwi-Mushonga (MDC-T proportional representative), the chairperson of the Portfolio Committee on Primary and Secondary Education, presented the report of the committee and was supported by parliamentarians from across the political divide.

She said the interactions her committee had with various stakeholders showed that the country was not ready for the re-opening of schools.