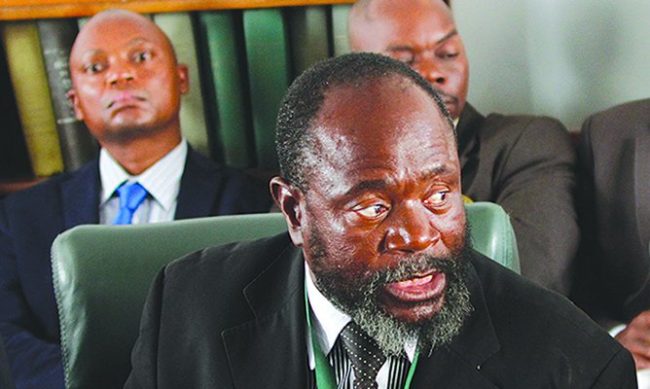 BUHERA South MP Joseph Chinotimba (Zanu PF) yesterday suggested in the National Assembly that laws must be crafted to throw into jail all those who travel outside the country calling for sanctions, in apparent reference to MDC leader Nelson Chamisa’s visits to Europe last week.

Chinotimba raised the issue with the Deputy Speaker of the National Assembly, Tsitsi Gezi, while claiming that those visits to Europe were the cause of suffering of Zimbabweans.

“This country is now in tatters because of people who are senior politicians who go to Britain, Germany and the United States to (throw spanners in the works) so that there is no development in this country,” Chinotimba said.

“I suggest that now we must craft a law to ensure that such people are jailed with stiff penalties.”

He went on to claim that kombis were refusing to take $1 and 50 cent bond coins because of the opposition.

This irked opposition MPs, resulting in Binga North MP Prince Sibanda raising a point of order to say that Chinotimba must not abuse Parliament’s points of privileges.

“Chinotimba is abusing the points of privilege. I know he is referring to my leader Chamisa. It is important that as MPs, we must listen to the whole clip rather than choose a 30 second part of what Chamisa said. It’s unfair,” Sibanda said.

Gezi dismissed Sibanda’s assertions saying that Chinotimba never referred to Chamisa and she said she will study the matter and respond to it at a later date.

The issue of sanctions raised by Chinotimba also comes at a time when the 46th session of the Sadc Parliamentary Forum (Sadc PF), which was held this week in Swakopmund, Namibia, also discussed a motion which called on the European Union (EU) and the United States (US) to remove the sanctions imposed on Zimbabwe, saying they undermined achievement of sustainable development goals (SDGs) and the livelihoods of Zimbabweans.

While Zimbabwe and Sadc have claimed that the sanctions were the cause of the country’s economic malaise, the US and EU have maintained that they are targeted at certain individuals and companies, and that the suffering of Zimbabweans is actually caused by massive corruption, maladministration and lack of government accountability on the country’s resources which should be also tackled to achieve SDGs.

Zimbabwe’s bad human rights record has also further worsened the EU and US stance on the removal of sanctions.

“Diakate, the chairperson of the standing committee on democratisation, governance and human rights of the Sadc PF, expressed grave concern at the illegal sanctions, which she said undermined the achievement of SDGs number one to five and impacted negatively on people’s livelihoods. The illegal embargo is hampering economic growth, thereby affecting the most vulnerable population who include young girls, women, children, the disabled and elderly people,” the Sadc PF statement read.

Added Namachekecha: “Zimbabwe has turned a new chapter under the new dispensation. The Sadc region cannot stand by and watch the suffering and pain in Zimbabwe, because an injury to one is an injury to all.”

Nicholas Prea, the Speaker of the National Assembly of Seychelles, described the sanctions as inhuman and that they had no place in the world new order.

Thandi Modise, the Speaker of the National Assembly of South Africa, said she could not afford to standby and watch sanctions hurting the unborn child.

The Speaker of the National Assembly of Angola, Fernando Piedade dos Santos, said the sanctions had no legal basis, claiming that President Emmerson Mnangagwa must be praised for his re-engagement trajectory.

Speaker of the National Assembly, Jacob Mudenda narrated the Parliament of Zimbabwe diplomatic roadmap, saying it had seen a delegation from Zimbabwe meeting their counterparts in London and the US Congress to further the cause of removal of sanctions in support of Mnangagwa.