Crisis out of hand: Zanu PF 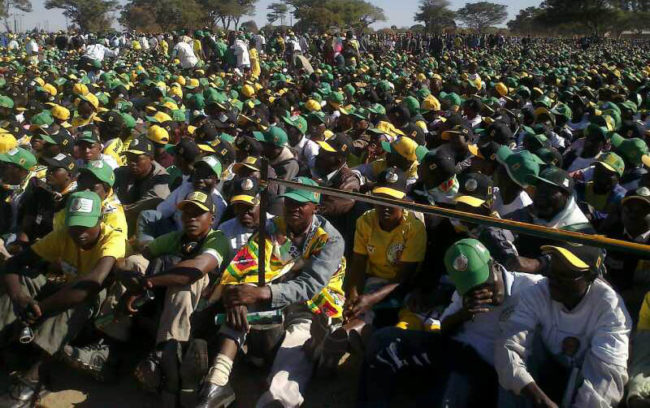 RULING Zanu PF party legislators cannot bear to face their disillusioned supporters because of an escalating economic crisis made worse by a severe drought, Zanu PF officials told NewsDay at the weekend.

The officials, who declined to be named, said government’s failure to deal with the economic crisis meant that the party was failing to deliver on its 2018 electoral promise and now some Zanu PF legislators were avoiding meeting their constituents because they had no answers to what is happening.

Zimbabwe is suffering its worst economic crisis in a decade, with shortages of power, fuel, foreign currency and staple food becoming the
order of the day.

The officials said some Zanu PF legislators were now avoiding holding constituency meetings with their electorate because they could not explain the current situation and government plans to address it.

Zanu PF national commissar Victor Matemadanda admitted the problem, saying he had warned the party during last year’s conference that some of the elected officials may be lacking strategy on how to deal with the electorate.

“Some (elected officials) may not know what to go and tell the people because they say things are difficult. I said some people may lack strategies and may not know what is going on and find nothing to say,” Matemadanda told NewsDay on Sunday.

“What could be lacking is information to the general populace, whereby people do not understand where we are and where we are going, but to those with economic knowledge, they know things have started to improve,” the Defence deputy minister said.

Matemadanda, however, chose to exonerate the party from the current economic mess, blaming it on “uncouth businesspeople”.

“Hardships are not just a thing that came, especially when they speak of austerity measures. Austerity measures are a government plan meant to resuscitate the economy, which was explained before it started by the President (Emmerson Mnangagwa) that things may get tough before they get better,” he said.

Matemadanda said the ruling party had played its part in creating a conducive environment for prosperity and shifted the burden on business failing to perform.

“What Zanu PF in government has to do is to create an environment conducive for investment, but Zanu PF is not in business. If there is failure, it is on the part of business, it is on the part of the productive sectors, not Zanu PF. Zanu PF should be faulted for failing to create a conducive environment for economic production. I don’t think that is true. People do not want to be objective about things, but want to capitalise on every negative thing,” he said.

“We all marched as Zanu PF and MDC to protest against the economy which had been mismanaged. Yes, it was a Zanu PF government, but it was the leadership and some elements who were destroying the economy that is why we marched (in November 2017),” he said.

Crisis in Zimbabwe Coalition spokesperson Marvellous Khumalo said: “What we have witnessed as an organisation is that due to the hardships being experienced by the people in the communities which are not in tandem with the promises that were given before the general elections, a number of elected officials are shunning to give feedback to their constituencies for fear of being taken to task or being assessed in terms of what they promised before the elections and what is actually obtaining on the ground.

“The electorate was promised heaven on earth. A lot was promised in terms of access to education, access to basic healthcare and a new dispensation in short. People were told that they were going to cross from the old order to a new establishment, but what is obtaining on the ground at the moment is even worse. People are angry, they are realising that they were given fake promises and no one is trusting the elected officials, hence they (elected officials) are hesitating to go back to their constituencies to face the people they lied to.”

In its central committee report last year, Zanu PF also acknowledged that there was a huge information gap between the higher echelons of the party and the lower party structures.

“The grassroot structures have been yearning for explanations on various issues that they do not understand, such as the austerity economic measures and incessant price hikes, which have badly eroded their incomes, making various households fail to make ends meet. Representatives such as councillors and MPs do not have a clue on how to explain to their constituencies the prevailing economic situation,” the report read.

During the run-up to the July 2018 polls, Zanu PF made several high-sounding promises to turn around the economy and improve citizens’ welfare, but two years down the line, the situation has worsened, making it difficult for MPs to interface with the electorate.

The post Crisis out of hand: Zanu PF appeared first on NewsDay Zimbabwe.