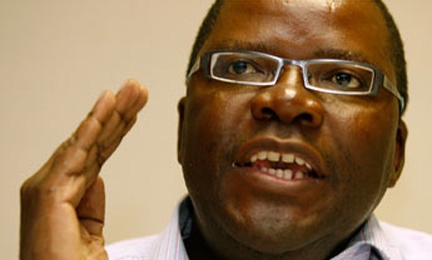 Speaking at a book launch yesterday at Sapes Trust in Harare, Biti said the manuscript illustrates the successes and failures of democracy on the continent based on milestones under the leadership of various leaders.

He gave the example of the growth of democracy in Botswana which aided the boom in its economy in comparison to Zimbabwe, which he said only witnesses the rituals of democracy once every five years in elections representing the institutional facades of representative democracy at the national level, yet the polls violate liberal-democratic minimum electoral standards in systematic and profound ways.
Biti said Zimbabwe has had 11 elections since independence, all of them contested.

The former Finance minister told the Daily News after the launch that 18 copies of the book had been seized by customs officials upon arrival, and efforts to get the books released were futile.
“18 copies of the book were seized, they just gave the excuse of customs. We said we would pay the duty but they refused.

“It’s just madness, it’s typical of Emmerson Mnangagwa,” Biti fumed, adding he was being inconvenienced by a “fascist state.”
He said the incident is reminiscent of authoritarian-era policies — ironically, the very subject of the book.

The books had been sent from Johannesburg to Harare by publishers Pan Macmillan through the courier company DHL to be in time for the Sapes Trust launch in Harare, attended by Obasanjo — a former military ruler who was democratically elected when Nigeria switched to civilian rule 20 years ago and remains highly influential on the continent.

Biti tweeted on Thursday night that he was “ridiculously asked to pay duty” for 18 copies of the book that had been dispatched by its publishers to Zimbabwe early in January.
“Now the president’s office, a euphemism for the CIO, has abducted these books. Who does this?” Biti tweeted.

DHL first contacted Biti to inform him that he had to pay duty on the books, which was strange to him, but he obliged.
He was then contacted by the person who was supposed to collect the books who said they had been seized and were at the “president’s office.”
Efforts to obtain comment from presidential spokesperson George Charamba late yesterday were futile.

The main Zimbabwean opposition leader Nelson Chamisa told guests at the book launch that Zimbabwe does not have a nation but a country. Congratulating the authors, Chamisa said a nation must have strong institutions, a nation must have citizens that are heavily regarded and considered.

“We don’t have that. We don’t have citizens, we have subjects and we don’t have leaders, we have rulers,” Chamisa said.
“Part of the problem in Africa is not just the celebration of big men ahead of big ideas, we have a problem of not writing. We believe in archaeology a lot and oral tradition at the expense of putting it in writing,” he said.

The MDC leader encouraged Africans to write books saying the days of oral tradition have gone and were well past their sell-by-date.
He said Africans should not rely only on foreign literature by authors such as Plato and Aristotle.
“Our parents and grandparents were better at ideas and wisdom but only sat around a fire just chatting and along the way, the words were carried away, in some cases they were eroded. So, we need to start a culture of writing. We can’t have strong institutions without strong ideas and we can’t have strong ideas without good books that are written by fellow Africans,” Chamisa said.
Obasanjo was requested by Chamisa to come to the podium to officially launch the book. As the former statesman took the mic after stepping up to the podium, he stated a poignant Nigerian idiom: “One day the lawn shall grow.”