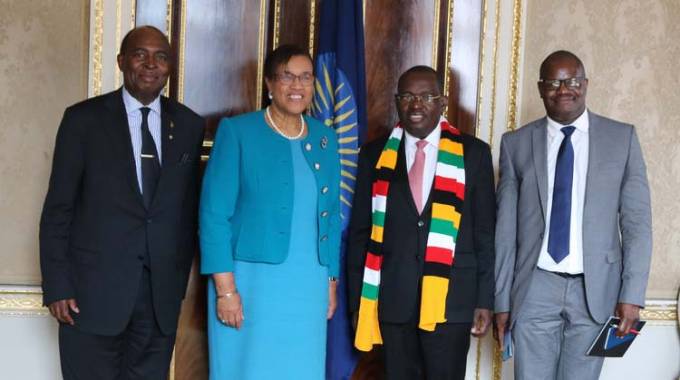 The positive engagement comes as Dr Moyo told another meeting he held with the Invest Africa Group in the United Kingdom that Zimbabwe was working with the UK to engage the United States over the removal of sanctions against Harare.

Minister Moyo was in the UK last week, as part of Government’s intensive re-engagement with the international community and to unpack progress on reforms being undertaken by President Emmerson Mnangagwa’s administration.

“Dr Moyo briefed the Secretary General on a number of issues being addressed by the New Dispensation in Harare, among them, how the new dispensation is keen on rejoining the Commonwealth, the elections in 2018 and the disturbances that marred an otherwise well-handled election,” said one source.

“He also spoke about the economic and currency reforms as well as media reforms. They also discussed hosting the Commonwealth Assessment team.”

Another source revealed that, in response to Minister Moyo, Hon Scotland said countries within the 53 member body “had keen affection” for Zimbabwe’s return to the organisation.

“There is a lot of warmth within the Commonwealth family for Zimbabwe’s return and wish that the process goes well. The SG noted that discussions during Commonwealth meetings were intermittently dominated by Zimbabwe even as it is absent.

“She also noted that Zimbabwe was uniquely and warmly treated by being privileged to receive an observer mission in its elections when it was outside the organisation. This suggested the keen affection for Zimbabwe.”

According to the source, Hon Scotland expressed; “personal happiness to have met and chatted with President Mnangagwa”, at the 2018 United Nations General Assembly in New York. The source revealed that the Commonwealth SG also outlined procedures that Zimbabwe and any other country need to undertake for readmission into the grouping.

Hon Scotland highlighted that the Commonwealth; “has opened up to all its countries and communities in all their sizes”, while noting that the organisation was looking ahead to; “the promising future of the Commonwealth with 60 percent of its population under 30 years of age,” added the source

In his meeting with the Investor Africa Group Dr Moyo said Government was engaging the UK Government as well as corporates in the US to assist in the fight against the ZDERA.

“One of the key issues which we thought is the key appropriate area is that together with the UK Government and UK corporates, we should partner and engage the US,”  he said.

“Secondly, we are also saying that instead of focusing at Government or Congress level, because ZDERA is a Congress legislation, we must actually approach corporates in the US so that they can come and invest in Zimbabwe.”

Dr Moyo  indicated that the strategy was beginning to yield positive results after US giant company General Electric committed to invest in the Batoka Hydro power project.

“So far, a lot of interest has been generated in the US to invest in Zimbabwe and General Electric is coming to build a big power station, 2400 MW. We have agreed between ourselves and Zambia that they are going to do it. Coincidentally, they are going to do it with the Chinese, China Power…It is a partnership,”  he said.

During the meeting with Invest Africa, the investors indicated that the current power tariff was unattractive to them.

Dr Moyo said investors were free to negotiate with Government, which was amenable to reviewing tariffs for independent power producers.

“The tariff has been unattractive — so it has been agreed that investors can come-in and negotiate an off-take agreement based on an attractive rate according to their figures, not necessarily generic figures in the country, but including an element of subsidy by the state, so that in reality an investor is expected to recoup an appropriate price for their price for their power,” said the Minister

“You don’t have to establish yourself always in conjunction with anybody, for example ZESA of ZETDC, but you can now establish your own business; but you ensure you route your electricity through the national grid and you will be paid appropriate prices.”

The Minister also appraised the investors on compensation to white former commercial farmers and told them that Government was open to investment in the agriculture sector as it was eager to reclaim the lucrative European markets.

Later, in his final engagement, Dr Moyo received a standing ovation when he addressed Zimbabweans resident in the United Kingdom at Zimbabwe House in London.

The Minister said he was not fazed by opposition activists who sought to embarrass him after his meeting at Chatman House.