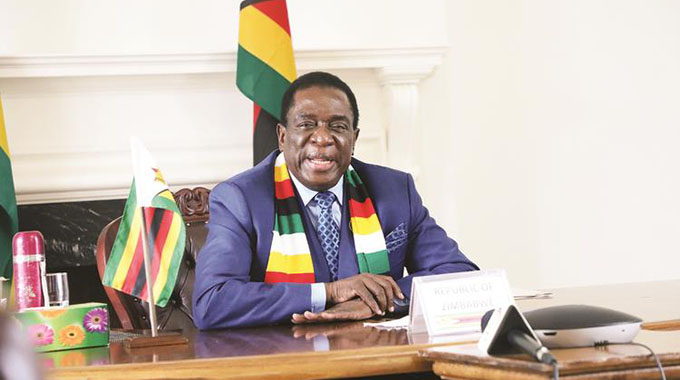 President Mnangagwa yesterday said every country was now under threat from social media malcontents and cyber terrorism and urged the country’s military training establishments to evolve with the changing global technologies to combat growing threats to peace and stability.

He was speaking during the commissioning of 138 regular officer cadets who completed their 21-month military training course at the Zimbabwe Military Academy (ZMA) in Gweru.

He said the Zimbabwe Defence Forces (ZDF) remained the guarantors of the country’s sovereignty, peace and security, hence the need for the army to adapt to the changing military tactics.

“Sadly, cyber and social media threats, cross border crime and terrorism are before us. These have far-reaching direct and indirect consequences to our internal peace, security, economic well-being and national interest and must remain on the radar of the security establishments.

“In view of the new realities, the training architecture within the Zimbabwe Military Academy must be agile and accordingly evolve,” said President Mnangagwa.

There was need, he said, for regular reviewing of the training courses at the ZMA and other military training centres for the security sector to remain relevant and to be abreast with the maintenance of peace and stability in the wake of new world demands.

“Equally, the need for continuous improvement on the part of the regular officers cadet course graduates, both military and academic, cannot be overemphasised. No one can tell what the future holds for us.

“It is my expectation that officers, men and women of the Zimbabwe Defence Forces, remain capable and skilful guarantors of our sovereignty, territorial integrity, national peace, security and interests. These are essential pre-requisites for development,” he said.

Peace was the backbone of development to any economy and the ZDF were expected to be innovative while moving with the changing times.

“Today’s graduating cadets are entering a world where unprecedented technological advances have changed the character of warfare. Technology is also an important ingredient for a knowledge driven economy as envisioned in the National Development Strategy 1 (NDS-1).

“I challenge you the graduands, as the future military leaders, to embrace this new body of knowledge,” he said.

President Mnangagwa applauded the People’s Liberation Army of China for recently donating over 100 000 vaccine dosses to ZDF saying such a gesture was a sign of commitment to the existing bond between the two countries.

“I want to take this opportunity to express my profound gratitude to the President of the People’s Republic of China, His Excellency, Xi Jinping, and the Government of China for their continued generosity and solidarity in the wake of the Covid-19 pandemic.

“The recent donation from the People’s Liberation Army of 100 000 vaccine doses and associated medical consumables for the Zimbabwe Defence Forces is yet another demonstration of the deep, fraternal and strategic nature of relations between the two countries,” he said.

The President, who is the Commander-in-Chief of ZDF, commended the 138 officer cadets for completing their rigorous training under difficult conditions brought about by the Covid-19 pandemic.

The course started with 205 cadets but some could not complete the 21-months gruelling course and dropped out.

“Let me also congratulate the leadership of the ZDF in particular the Zimbabwe Military Academy Commandant and directing staff, for the success of the Regular Officer Cadet Course number 3/37/19 held under unusual and difficult Covid-19 induced conditions,” said the President.

The officers also graduated with a diploma in military training and education from ZMA affiliate, the Midlands State University. The programmes were running parallel to the regular officer cadets course

Thirteen of those who graduated were females with two of them walking away with second and third best student prizes.

Cadet Officer Timothy Muyangwa who became the overall best student, was awarded with the sword of honour by the President who was the reviewing officer.