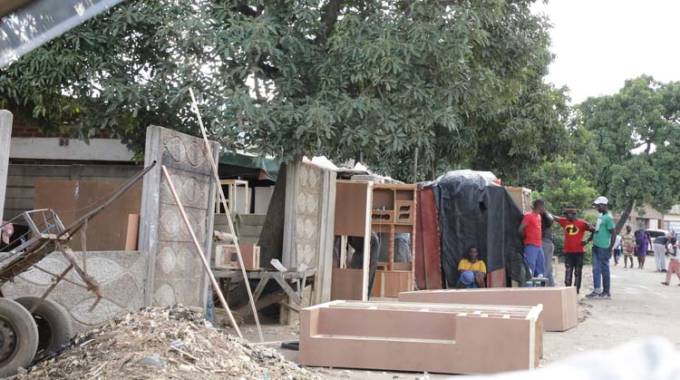 THE neighbourhood surrounding the popular Glen View furniture complex has transformed radically over the last year.

This previously serene hood has been invaded by organised chaos which threatens to tear apart its very fabric. What used to be a regular high-density suburb now resembles an expansive open-air furniture showroom. Loud chatter, car hooters, grinders and generator noises envelop the aural atmosphere.

Roads like 116 Crescent, 18th Avenue and 27th Avenue have been cordoned off, becoming micro-branches of a burgeoning street industrial enterprise. Closure of the furniture complex last year following the introduction of the first lockdown has brought with it a rapid migration of small-scale furniture manufacturers from their usual operating area, into the residential spaces.

“Glen View Area 8 was closed when the first lockdown came and it has not been open since then,” said Cleopas Kandeya, who used to work from the complex.

“We stopped and went home, however, those among us whose parents had houses nearby and were operating from there continued with work without disturbance, and they were making a killing.”

Slowly, the affected carpenters and traders began engaging local homeowners seeking to rent operating space in their yards. Most homeowners, some of whom are of advanced ages, could not resist the allure of extra income and brought the tradesmen into their homes.

“At first I was skeptical, then I saw my neighbours housing carpenters from the complex and it was working out well for them. Our tenants were, at the time, struggling to pay their rent on time, so this came at the right time,” a lady who identified herself as Gogo Mwanza who lives near Willowvale Road explained.

On average, renting work space costs US$40 a month, although the cost recedes the farther one is from Willowvale Road, usually referred to as Kuhasha. Some carpenters with smaller operations are joining forces to rent yard space at a single property in order to cut costs.

“We have resolved that carpenters take care of the electricity bills. I have a pre-paid metre, so I told them that they pay for all the electricity we use because their machines take up most of the power,” said Gogo Mwanza.

To circumvent electricity costs, some carpenters use small generators. Naturally, some residents are unamused by the amount of traffic the new order has brought into their neighbourhood. Mr Takawira Magore, who appeared to be in his fifties, registered his displeasure.

“This place has changed, we can no longer have peace in our homes. There are always people moving around and it is only a matter of time before people start encroaching into our yards. Already we are hearing of more cases of theft,” he said.

“It is no longer uncommon to see a truck parked in front of your gate. When you try to talk to the drivers they are rude. We have children who are always running around, they are at a risk of being run over, tichaitirwa zvimwe,” said Mr Magore.

But the carpenters are enjoying the dividend of this “invasion”. They say the convenience brought by coddling with families is better than that enjoyed inside the Glen View 8 furniture complex.

“We are not going back to the complex,” said a carpenter popularly known as Madzibaba.

“Our stock would get burnt every now and then and we would run losses. I have been here for about nine months and not even a single fire incident has been recorded.”

In its original state, the furniture complex is a convoluted ecosystem. Prices of wares are determined by powerful middlemen who solicit for buyers. They are often connected to space barons. The Sunday Mail gathered that in old times, it was “criminal” for a manufacturer to charge more or less than would have been determined by the touts. Moving into houses has, however, worked to the advantage of the carpenters who no longer have to pay off space barons or their middlemen.

“Our buyers are no longer being disturbed, they can now come to a specific address where they know they will get the best product. I do not know why I would opt to go back to the complex, once open,” said Madzibaba.

The euphoria gripping the carpenters and some homeowners comes with its fair share of danger. The furniture complex is prone to destructive fires. Over the past five years, there have been more than four fires, which have razed down property worth hundreds of thousands.

The invasion into the neighbourhood by the carpenters along with their highly flammable wares and apparatus is triggering intense concern. The City of Harare Fire Department said danger could be on the horizon.

Harare’s assistant chief fire officer Mr Clever Mafoti has been among teams that have been sent to douse off four different fires at the complex. He said the homeowners and carpenters were fashioning a cocktail for disaster.

“There is a danger in that the carpenters bring machinery and chemicals which they use, like paint, thinners, vanish and other chemicals. When the chemicals are being used, they are emitted into air and people are inhaling them, there is a danger of respiratory complications,” Mr Mafoti said.

He said most of these chemicals are highly flammable.

“What has happened is there is now industry in houses, and this presents a scary prospect. In the event that a house catches fire, it may end up affecting more than one house. When we fought fires at the Area 8 industrial site in the past, we did not record deaths because the fires usually started after hours when the area was clear.

“But now that the activity has moved into houses, we may end up recording deaths,” said Mr Mafoti.

Besides the danger, the activities are unlawful. Council’s Prevention of Illegal Activities By-Law of 2016 stipulates that illegal activities on any premises attract a fine or attract imprisonment of up to 15 days.

The yards into workshops and furniture show rooms is having a negative bearing on the marketability of the houses in the neighbourhood.

Realtor Mr Gashirai Zvavandanga said: “Essentially market values of an area are affected whenever there is a change in use.

“Each property zone has its own uses and the idea is that every place should have coherent uses. The moment we start using a residential area as an industrial area, we invite negative externalities such as waste disposal and pollution. It affects the value.”

He added that residential areas are ranked by peace, liveability and the situation in Glen View 8 reflects badly on those rankings.

At peak occupancy it was estimated that not less than 5 000 people were housed at the Glen View 8 complex housed daily.

The movement of this deluge into residential properties clearly cannot be sustained.