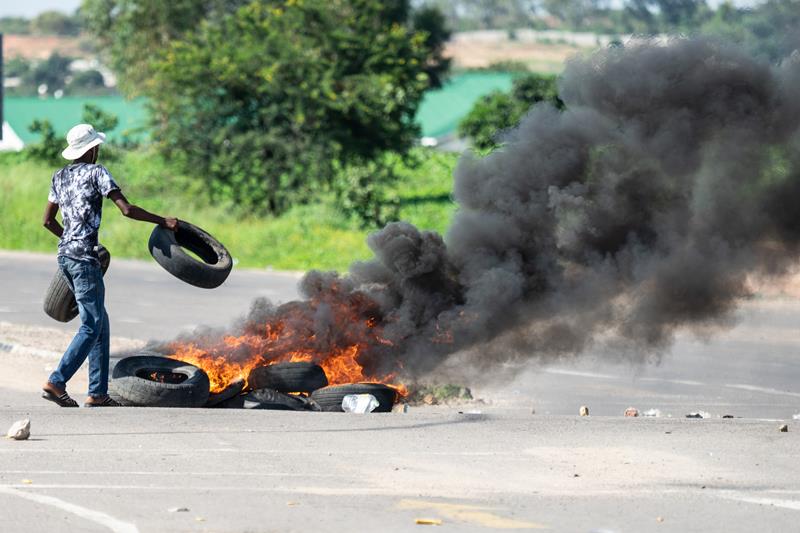 HARARE – Zimbabwe is now entering unchartered waters following several deaths of innocent people and arrests of pro-democracy activists and senior opposition figures by security agents in the on-going clampdown against those who participated in the fuel price hike demos.

This comes as doctors said they have so far treated 26 people for gunshot wounds, 90 for injuries sustained in assaults by security forces — as well as performing emergency surgeries on 16 people injured in the skirmishes between protesters and security agents.

“We have so far treated more than 90 people injured from assaults, and we have conducted more than 16 gunshot wound operations.

“Three people have died so far but we did not manage to gather the exact number of deaths because others are sent straight to the mortuary.

Police have said so far three people have died from the deadly violence which broke out in the capital city and Bulawayo on Monday when thousands of long-suffering workers heeded the call to stay-away from work in protest of last weekend’s steep fuel price hikes by President Emmerson Mnangagwa.

Meanwhile, in a further bad advertisement of Mnangagwa’s government, clergyman and #ThisFlag activist Evan Mawarire was arrested at the crack of dawn after heavily armed soldiers surrounded his house in Harare before detectives obtained a warrant for his seizure.

His lawyer Beatrice Mtetwa told the Daily News that the popular cleric had been arrested for “inciting violence”.

“They have not formally charged him but they alleged that he incited violence through social media platforms like Twitter and we asked full details but they were failing to tell us where he exactly incited violence.

“Mawarire simply told people to stay away and really that is not inciting violence … he has not been warned or cautioned but they just detained him at the Law and Order section. We asked them to explain the allegations but they said the investigating officer is yet to be allocated,” Mtetwa said.

Mawarire shot to prominence in July 2016 when he led a paralysing strike similar to this week’s when restless Zimbabweans, among them civil servants — went on industrial action protesting the falling living of standards — during the tenure of the much-disliked ousted former president Robert Mugabe.

As this week’s strike entered its final day yesterday, the main opposition MDC claimed that its organising secretary and MP for Mkoba — Amos Chibaya was arrested at his home — in the Midlands by police officers whom it accused of severely assaulting him.

“The government is the one terrorising people by increasing fuel prices. They are even going into suburbs and beating up innocent people.

“Yesterday (Tuesday) I received a message saying our organising secretary Amos Chibaya had been captured at his home and I understand he was badly beaten. He is still in their custody.

“Government is doing what (the former South African president Kgalema) Motlanthe commission castigated. I wonder if they will be setting up another commission after this,” MDC spokesperson Jacob Mafume said.

Mnangagwa’s surprise decision on Saturday night to hike the prices of both petrol and diesel from $1,32 and $1,24 to $3,31 and $3,11 respectively sparked riots in Harare and Bulawayo on Monday as the first day of the three-day strike was hijacked by jobless youths.

Police and heavily-armed soldiers were engaged in running battles with the protesters in the two cities leading to deaths, several arrests, injuries and use of live ammunition.

Addressing a media conference on Tuesday evening Information minister Monica Mutsvangwa said deployment of security forces was necessary as there had been “total” violation of the law during the protests.

“The events of the past 36 hours have been characterised by well-coordinated criminal behaviour, a destructive and violent pattern which includes murder of a police officer, Constable Maune of ZRP Entumbane, Bulawayo, who was stoned to death in cold blood, and the injury of several others.

“Barricading of roads and extorting money from motorists, reckless destruction of infrastructure such as bridges and tollgates, callous burning of school bus and at least 30 motor vehicles, looting of shops … harassment of innocent members of the public, disruption of children’s lessons in schools, forced closure of business entities, attempts to overrun police posts and steal weapons …,” said Mutsvangwa.

She said the security agents will remain deployed as the situation in Harare was still tense.

Also commenting on the events of the last three days, a Zanu PF insider told the Daily News that the country was fast hurtling towards unchartered waters as the mayhem witnessed portended ominous things.

“This ship of chaos is now sailing on its own and nobody knows when and where it will stop. This is sad but also stunning that after November 2017 Zimbabwe finds itself in this situation.

“There is despondency and disappointment all round…even among Zanu PF officials who feel that the party has been let down by its government,” the official said.

Meanwhile, political analysts said the deployment of soldiers and the subsequent deaths and treatment of people from gunshot wounds, had potentially killed Mnangagwa’s re-engagement efforts with Western countries.

University of Zimbabwe political science lecturer Eldred Masunungure said he did not see any comeback for Mnangagwa and his administration unless they engaged both the MDC and civic society leader in a “mature” dialogue.

“The protests have damaged him (Mnangagwa) beyond repair and remember this is just after the August 1 killings.

“Even if he tried to argue that he was not around, it will mean that he is not in charge. This has dealt a major blow to Mnangagwa’s efforts of re-engagement … it has to be put in the freezer. I don’t know what he will say to the international community.

“The deployment of the army in his absence probably shows that there are some superior elements in the government. The question then is does ED has total control of the security sector?”Masunungure said.

“Part of the solution is to start negotiations … and come up with a national dialogue process not just with the opposition but also civil society.

“We are having problems because we do not have national consensus. Mnangagwa must swallow his pride and know that on his own he can’t take this country forward. A broad-based government is the best way forward.

New York-based Human Right Watch director for southern Africa Dewa Mavhinga said this week’s violence underlined the need for Mnangagwa to resolve the current economic crisis, one way or the other.

“The utter chaos occurring in Zimbabwe completely undermines efforts by the government … at re-engagement and reviving the economy.

“No investor would want to invest in a country that is burning so … Mnangagwa and his team should urgently put out the fire at home first before going out to engage with the international community for economic revival.

The country is currently in the throes of a mega economic crisis which has resulted in shortages of basic consumer goods, fuel and critical medicines.

Apart from experiencing these, Mnangagwa’s government is also battling to avoid strikes by civil servants.