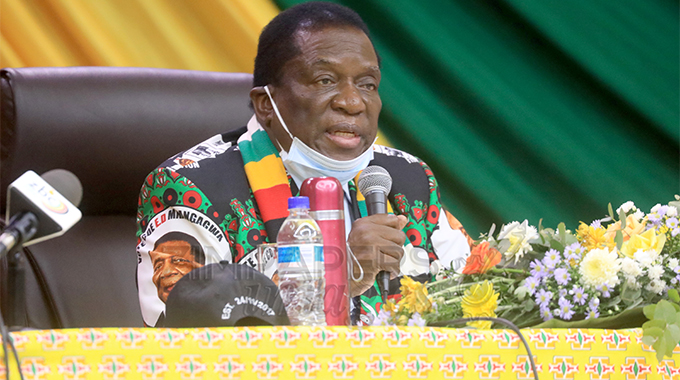 This comes at a time when the party is compiling a list of successful candidates in the DCC election process whose names would be announced once the process is completed. Speaking at the 346th Ordinary Session of the Politburo at the party headquarters in Harare yesterday, President Mnangagwa said the establishment of DCC structures would enhance interaction between the party and its members.

“More importantly, once established DCCs, should coordinate and unify our party through constant interaction with political districts as we journey towards Vision 2030.

“Our meeting today should remind us that we are a people’s party with the responsibility to advance the emancipation and economic empowerment of our people,” said the President.

The party constitution, he said, requires members to be loyal, patriotic and to promote peace and unity.

“Under the Second Republic, our DNA entails that we serve our people wholeheartedly and promote inclusive development, which leaves no one, and no place behind” he said.

Addressing the media after the Politburo meeting, Zanu PF acting secretary for Information and Publicity Cde Patrick Chinamasa said: “There is now compilation of a list of those who qualify to stand in the forthcoming DCC elections. As the Politburo we have resolved to advice the Provincial Coordinating Committees on how to proceed after compiling the list of the successful contestants which is currently in progress.” He said the Politburo received a report from the Commissariat Department on mobilisation strategy.

“We received a report from the Commissariat Department and the Politburo encouraged all departments of the party to intensify their efforts towards the attainment of five million votes resolution by 2023.

“The commissariat department has been receiving and welcoming new members from the opposition party, MDC-A, with the latest being in Harare South where several former MDC-A members defected to Zanu PF.”

The Politburo, Cde Chinamasa said, also received a report on Covid-19 from the Secretary for Health and Child Care Dr David Parirenyatwa.

In his brief to the media, Dr Parirenyatwa warned Zimbabweans against being complacent as the country was witnessing an increase in number of cases.

Meanwhile, the Politburo members led by President Mnangagwa welcomed back Cde Simon Khaya Moyo who is the substantive Secretary for Information and Publicity who had been unwell for some time now.

Cde Chinamasa said Cde Khaya Moyo went to India for a review and the lockdown measures kept him there for a good five months.

“He is now back but still recovering and he will be advised when he can resume duty and that decision rests with His Excellency, the President who is the appointing authority”, said Cde Chinamasa.