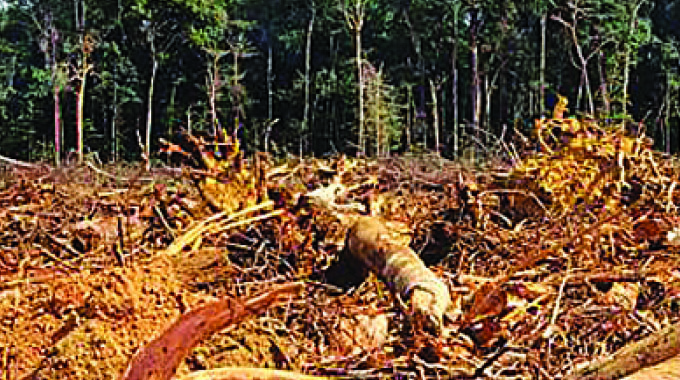 Jeffrey Gogo Climate Story
The Forestry Commission of Zimbabwe (FCZ) has always been at the forefront of forest conservation.

In the other extreme, small-scale tobacco farmers have tended to resist such noble pursuits, perhaps out of necessity, greed and ignorance – a combination so toxic it is hard to tame.

The army of smallholder farmers, numbering in the tens of thousands, demolish the equivalent of 60 000ha of precious native forests each year gathering fuel wood to cure their tobacco leaf.

To put things into perspective, that’s an area more than half the size of Harare Metropolitan Province.

We did the math, a simple calculation really. But the Forestry Commission’s Violet Makoto was cautious about scientific misrepresentation, arguing “it would not be correct to put the rate of deforestation as a tree count” because of “technicalities” involved with the act of deforestation itself.

“We look at a hectare that has been denuded,” the spokeswoman explained, one eye cast on the nature of the damage — a systematic targeting of full-grown indigenous trees.

“This means even when farmers harvest an entire hectare of native forests for wood, they’re only cutting those that suit their contemporary needs, leaving a few undesired trees standing.

That is not an argument in favour of tobacco-led deforestation, however. Tobacco farming remains one of the major causes of forest loss in Zimbabwe, accounting for up to a fifth of the national deforestation total of 300000ha annually.

It is a dilemma for Zimbabwean authorities, and the FCZ, in particular, both in the sense of environmental sustainability and economic development and black empowerment. Tobacco oils the economic wheel, raking up to US$1 billion in foreign receipts last year. Only the mining sector accounted for more foreign earnings.

Zimbabwe is the world’s largest producer of flue-cured tobacco after China, Brazil and the United States. Local tobacco is top quality, mainly due to friendly climatic conditions, and is highly sought-after throughout the world for blending with tobacco from other world regions.

On the other hand, high earnings have drawn, at one time, 105 000 smallholder farmers, to the crop. Small growers account for about 90 percent of Zimbabwe’s annual tobacco output, which reached a record 258 million kg in 2019.

But their reliance on fuel wood to cure their crops is a major cause of deforestation in the country. And in the absence of viable alternatives and more fuel-efficient methods of curing, weaning smallholder farmers off their addiction to natural woodlands — key to stabilising macro and micro climates — has proven a Herculean task.

There has, perhaps, been a certain amount of self-mutilating tolerance by the Zimbabwe Government towards the destructive tendencies of axe-happy tobacco farmers, to allow for the transfer of financial wealth into the hands of the new breed of black farmers’ post-land reform. This sort of both traditional and politics-driven laissez-faire eventually blew up, forcing the State and industry to become frantic in the quest to fix things up, worried that deforestation could ultimately be bad for business as well as for the environment.

All the while, the Forestry Commission trudged on, planting at least a million trees each year and working with farmers to try and compel and persuade them to plant one hectare of the fast-growing eucalyptus trees for every 10 hectares of tobacco.

The idea is that farmers become self-supporting as far as fuel wood is concerned, eliminating unnecessary recourse to native forests. Now, the stakes have been raised. With $15 million funding from the Tobacco Levy, the Forestry Commission is targeting 40 million mixed tree seedlings for the tobacco sector this year alone.

But will that be enough?  “Tree planting alone is not enough,” Violet Makoto, the FCZ spokeswoman, admitted.

“This is why we promote woodland management to support the natural regeneration of natural forests. Tree planting is to provide a renewal alternative to wood energy where you see that we plant exotics that are fast growing in nature. This is to reduce pressure on indigenous forests and allow them time for regeneration,” she added.

Natural woodlands provide a range of water, climate and biodiversity benefits that cannot be found in man-made plantations, say experts.

The complexity of a natural forest, which allows self-regeneration in a uniquely small individual climate, and the wide range of plants and animals, distinctly separates it from plantations.

Plantation forests “tend to grow a single species and require ongoing intervention such as fertilisation and pesticides.”

Recognising the tobacco merchants have also stepped in. In 2013, the industry formed the Sustainable Afforestation Association, aiming to plant at least 4 000ha of gum trees each year for the next 7 years, creating a future energy source for curing the golden leaf. The first harvest isn’t due until next year.

One of the most promising strategies is the Tobacco Research Board’s “rocket barn”, which aims to improve energy efficiency, cut firewood use and minimise pollution when curing tobacco leaves.

The barn gets its name from its ability to draw in dry air using exhaust smoke, rather like a rocket which gains its upward thrust from exhaust gases.

The large diameter of the chimney not only removes smoke from the furnace but also expels moisture from the barn.

The Tobacco Research Board says the rocket barn is designed to promote high-combustion efficiency, minimising the release of ozone pollutants into the air.

As a result, it uses 50-55 percent less fuel wood than conventional barns.

The scale of action needed to rein in tobacco-related deforestation cannot be over-emphasized. Authorities have allowed the practice to fester like a deepening wound, but not anymore.