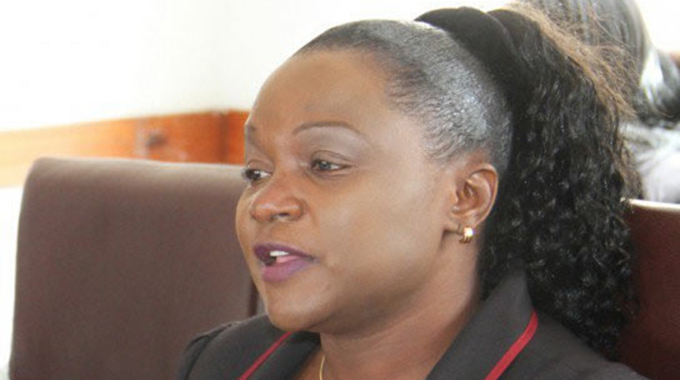 Justice Legal and Parliamentary Affairs Permanent Secretary Mrs Virginia Mabiza said her ministry was in the process of computerising the records system at the Deeds Office to curb corruption and improve efficiency.

Daniel Nemukuyu
Investigations Editor
Nearly 100 home-seekers have this year lost millions of dollars in botched sales of immovable property after officers from the Deeds Registry and the Registrar General’s Office allegedly supplied title deeds and national identity cards of property owners to criminals.

The officers corruptly assisted criminals to obtain title deeds and identity documents of the real owners so they could swindle home-seekers.

Most people duped are people who pay the fake owner directly. However, only a lawyer is allowed to arrange the transfer of property and lawyers have to maintain trust accounts, audited each year, so they can be trusted to be the only person who has both the deeds and the payment.

Lawyers are supposed to do the necessary checks before arranging the deed of transfer.

Criminals use genuine title deeds, or have access to the real deeds and forge copies, but these bear the correct information.

They also use identity cards of the property owners, taking advantage of the picture distortions that come with age.

Since most people obtain national identity cards while still teenagers, as the decades pass their appearance changes.

That creates room for fraudsters to claim identities of the property owners in their criminal transactions.

Reports of such crime are on the rise.

Some criminals obtain identity cards bearing their own photograph, but showing particulars of the property owners as a way of duping unsuspecting and desperate home-seekers.

Some lawyers and estate agents have also been sucked into the scandal.

The involvement of officers from the RG department is clear in that identity documents used are obtained from their offices.

Even the forged ones that bear faces of criminals are also products of the RG’s office.

Tittle deeds used to convince property buyers are also obtained from the Deeds Registry, confirming that some officers are conniving with criminals.

Harare lawyer, Mr Caleb Mucheche, who does conveyancing work, said most documents used in real estate fraud originate from the two public offices. He said the two offices must guard against criminal syndicates that corrupt their officers.

“The Deeds Registry and Registrar General’s offices must jealously guard and maintain an impeccable public reputation as producers of reliable official documents by preventing any abuse of such offices by criminals or illegal syndicates as conduits for production of fraudulent deeds and IDs,” he said.

Criminal Investigations Department (CID) Commercial Crimes Division said such cases were rife in Harare’s medium and low density suburbs and some suspects had since been arrested and sent to court.

“The division handled over 77 cases between January 2020 to date and 12 have been detected with accused persons being arrested and sent to court.

“All the cases occurred in Harare save for one which was referred from Kariba. A total of 16 imposters are on the police wanted list for real estate related cases,” said the police.

Justice Legal and Parliamentary Affairs Permanent Secretary Mrs Virginia Mabiza said her ministry was in the process of computerising the records system at the Deeds Office to curb corruption and improve efficiency.

“The ministry and the Deeds Office are both aware and saddened by the rise in fraudulent activities involving immovable property. The Deeds Registries Act and Deeds Registries Regulations were amended recently to permit automation of deeds records, use of securitised paper for title deeds, and use of biometric security features when signing power of attorney.

“About 95 percent of the deeds records have been captured to enable online searches by members of the public,” said Mrs Mabiza.

She said an online search enabled one to obtain information on the property owner, property description, property size, transaction history and encumbrances (caveats and mortgage bonds).

“The online deed search is, however, not comprehensive as one is not able to view the actual title deed. The title deed needs to be scanned first before one can view it electronically.

“Our consultant has been working on a prototype aimed at giving a digital solution of storing records through scanning all physical title deeds.

“A demonstration of the prototype was held last month where it was noted that title deeds from 2019 going back to 2015 had been scanned and the scanning is expected to be completed early next year. This will definitely ensure that there is no tampering with title deeds by fraudsters,” she said.

Plans are also afoot to integrate the system with other key agencies such as the Zimbabwe Revenue Authority (Zimra), the Surveyor-General and the Registrar-General.

Mrs Mabiza said the Deeds Registry had also stopped issuing copies of title deeds to people as a security measure.

“We have advised police to report to us any member of staff involved in corruption or fraudulent activities involving immovable property during the course of their investigations so that disciplinary measures are taken,” she said.

The office’s security section had on many occasions, handed over a number of people found in possession of forged documents.

Criminals identify undeveloped stands in suburbs before placing advertisements in newspapers and online.

Meetings are arranged at offices of bogus estate agents or bogus lawyers.

Most bogus agents and lawyers are those delisted by their professional associations for improper conduct.

To convince the home seekers, criminals produce title deeds to the properties, some being photocopies or original documents and identity cards bearing the particulars of the actual property owner.

Money is usually paid in US dollars.

The offence is discovered when the purchaser seeks transfer of ownership or tries to occupy the stand or house.

The CID Commercial Crimes Division urged home-seekers to carry out due diligence before buying immovable property.

“Let us verify any offer before one commits resources because fraudsters are out there looking for potential victims,” reads a statement from CID.