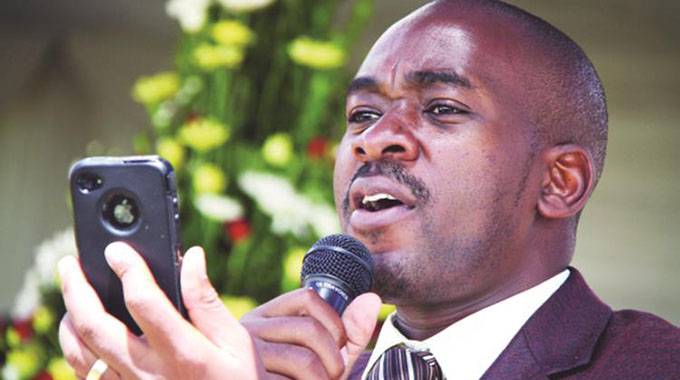 BY MOSES MATENGA
OPPOSITION MDC Alliance leader Nelson Chamisa toured the demolished houses in Budiriro high-density suburb in Harare where he came face-to-face with desperate residents, who have been sleeping in the open for two days after their houses were razed down.PPOSITION MDC Alliance leader Nelson Chamisa yesterday described the demolition of houses, which exposed residents to rains and diseases as “cruel and heartless” and criticised the government saying that it behaves in an unpleasant old fashioned manner.

Government and the opposition party which runs the Harare City Council have been playing the blame game denying responsibility for the demolitions.

Over 150 houses were demolished in Budiriro, leaving hundreds of people, including children in the open.

Property worth thousands of dollars was also destroyed in the process.

“The council is under control of spooky and shadowy forces that are ruthlessly driving an agenda to punish the people. Council has no police, no teargas canisters and it is clear it is the State that gave the police the greenlight to fight the people. What we can see is the visible hand of the State interfering with the operations of the councils,” Chamisa said.

“It is a pattern of corrupted governance software where you use force and violence even where it is not called for. Why were the houses allowed to be built in the first place? Why inflict pain when the weather conditions are unfavourable and the rains are upon us. Can’t you spare a thought for kids and parents?

“The heartless and cruel demolition of citizens’ homes is a violation of the dignity and security of persons. This command politics based on iron-fisted governance style must be resisted by us all. Those responsible please stop it,” he said.

Ironically, the demolitions took place at a time when the world commemorated International Human Rights Day.

Vendors Initiative for Social and Economic Transformation executive director Samuel Wadzai said: “Today’s (yesterday) commemorations come on the backdrop of ongoing destruction of houses by local authorities ostensibly because they were constructed outside of city council regulations. These destructions are totally inhumane, particularly due to the fact that beneficiaries of these stands were led to believe that a regulatory process would be undertaken and that there would be no destructions.”

In a statement earlier, MDC-T secretary-general Douglas Mwonzora, whose party also controls part of Harare City Council said: “Destroying people’s dwellings during the rainy season is just cruel, sadistic, inhumane and degrading. It is unconstitutional and unconscionable. The destroyers were aware of these dwellings all along, but decided to strike now – sad.”