‘Demolitions will cause academic genocide’ 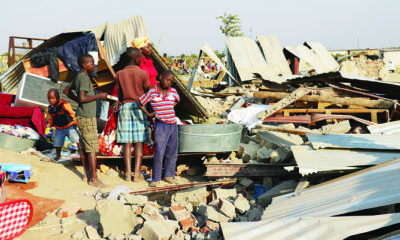 TEACHERS’ unions yesterday decried demolition of houses and vending structures built on illegal sites, saying the move would severely affect children of the affected families and cause “academic genocide”.

Their statement came at a time when a recent study by Friedrich Naumann Foundation revealed that out of approximately six million students enrolled at learning institutions in the country, about 840 000 dropped out of school due to COVID-19-induced poverty.

This week, there were demolitions of illegal vending structures in Harare and Chitungwiza, resulting in thousands of families losing their livelihoods. The Amalgamated Rural Teachers’ Union of Zimbabwe (Artuz) said the demolitions would affect learners’ right to education.

“The demolitions will push more learners out of the classroom as families lose incomes.  Over one million learners have already lost their rights to education due to austerity measures and COVID-19 disruptions. This is academic suicide in full swing,” Artuz tweeted.

“Ongoing demolitions will, therefore, deprive several families of their homes and vending sites and deprive families of accommodation or income, which will directly and indirectly affect learners,” he said.

Zimbabwe Teachers Union spokesperson Goodwill Taderera said: “When people get dislodged from their place of residence, it is obvious that incomes get lost. Remember, most are involved in informal trading and they would have gotten used to their livelihoods and when you are no longer in your territory, you are more like a fish out of water. Children will be
affected.”

Primary and Secondary Education ministry spokesperson Taungana Ndoro said he would only be able to comment on the issue when schools open.

Meanwhile, the Nelson Chamisa-led MDC Alliance described the ongoing demolition exercise as a crime against humanity. The opposition party said the exercise had the hallmarks of Operation Murambatsvina (clean-up) which government carried out in 2005, leaving over
700 000 people homeless.

The post ‘Demolitions will cause academic genocide’ appeared first on NewsDay Zimbabwe.