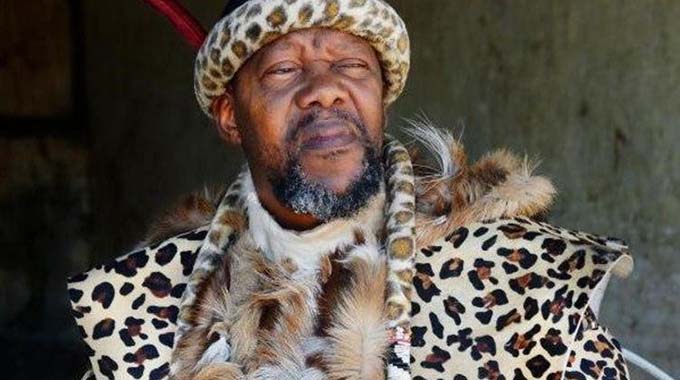 Mr Felix Nhlanhla Ndiweni recently dethroned as a chief in Ntabazinduna, has approached the High Court challenging President Mnangagwa’s decision to strip him of his chieftaincy following a recommendation by Cabinet and the Matabeleland North Provincial Assembly of Chiefs.

Mr Ndiweni ceased to be Ntabazinduna chief on November 30 and was subsequently stripped of all Government benefits accruing to him.

He wants an order nullifying his removal and declaring it unlawful.

Mr Ndiweni also wants the court to direct Ms Dlamini and Mr Zivovoyi to stop dispossessing him of his Government-issued vehicle and the chief’s regalia among other State-owned assets in his possession.

In his founding affidavit, Mr Ndiweni said his removal from the chieftainship was unlawful and a violation of his constitutional rights under the Administration of Justice Act as well as under the common law.

“I can only be removed from my office as Chief Ndiweni upon lawful action and processes fully respecting my constitutional rights under subsection (1) and (2) of section 68 of the Constitution of Zimbabwe, which grant me the rights to administrative conduct that is lawful, reasonable, procedural and substantively.

I have the right to be promptly given reasons for the administrative conduct taken and affecting my rights and I was denied all these rights,” he said.

Mr Ndiweni argued that he was not given enough notice of the nature and proposed action against him including a reasonable opportunity to make representations on the matter.

“I was denied the most basic, elementary and most sacrosanct of all rights, the right to be heard before any decision is taken affecting one’s right commonly referred to as audi alteram partem rule, a tenet of natural justice which goes back to the beginning of time when God granted Adam the right to make out his defence for committing the cardinal sin before banishing him from the Garden of Eden,” he said.

Mr Ndiweni argued that section 3 (2) (a) (i) of the Traditional Leaders Act under which President Mnangagwa removed him from the office of Chief Ndiweni has no application to the removal of chiefs.

He said the legal provision does not grant the President the power to strip him of his chieftainship.
“That provision deals exclusively with the issue of appointment of chiefs and not their removal.

Chief Ndiweni was duly and lawfully appointed by the then President, the late Robert Gabriel Mugabe in June 2014. Accordingly, no question arises under section 3(2) (a) (i) of the Traditional Leaders Act,” he said.

“I submit that, in casu, the respondents acted in violation of the law and thereby making their conduct unlawful, null and void.”

Mr Ndiweni said he was not officially served with the letter of dismissal, but only saw it being circulated on social media.

He said the Matabeleland North Provincial Assembly of Chiefs, the National Council of Chiefs, Minister Moyo and the President never gave him notice of the intended administrative action.

Mr Ndiweni claimed that his removal was necessitate by his “honesty and candid” opinion on issues affecting his community and alleged failure by the Government to secure better life for the citizens.

“My constitutional rights have been flagrantly violated by the respondents’ administrative conduct that is unconstitutional, unlawful, biased, unreasonable, partial, disproportionate and unfair.

I submit that I have a good case for a declaratur and consequential relief under section 14 of the High Court Act,” he argued.

Cabinet in recommending the removal of Mr Ndiweni noted that the Ndiweni chieftainship follows the primogeniture system of succession whereby the right of succession belongs to first born sons (father to the eldest son).

Chief Khayisa Ndiweni died in 2010 and culturally, the late chief’s eldest son, Joram Ndiweni, was supposed to take over the chieftaincy from his father.

However, this did not happen as the then District Administrator for Umguza District recommended the appointment of Felix Nhlanhla Ndiweni, the second born son of the late chief on the auspices that it was the will of the late chief.

Since Nhlanhla’s appointment on June 9, 2014, Cabinet noted, Joram and some members of the Nhlambabaloyi clan had continued to petition Government for his removal as it went against the Ndiweni principles of succession and therefore in contravention of Section 3(2) of the Act.

Although he was duly appointed, Nhlanhla was never sworn in as Chief Ndiweni.