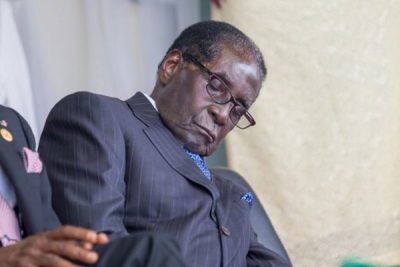 Former president Robert Mugabe has retreated from his grand public life often characterised by first-class privileges of armed security escorts and helicopter jaunts across the country.

Since his ouster in a military coup last year in November, Mugabe has remained behind the scenes, mostly at his Blue Roof mansion in Borrowdale Brooke. However, reports indicate Mugabe has been out of the country, in Singapore, for at least over a month.

For the folk at Kutama — Mugabe’s rural homestead situated about 100 kilometres west of Harare — the whirring sirens that signalled the veteran leader’s frequent visits to Zvimba are no more.

Some of the villagers are now wondering if the nonagenarian still visits his rural home at all.

“We no longer know whether he is here or not because he no longer has that long motorcade and the security agents and soldiers that were always part of his entourage. I am sure if he comes, he slips in quietly,” said a saleslady at the shops adjacent to Mugabe’s vast yard.

Measuring over 200 000 square metres as seen online on Google Maps, Mugabe’s homestead is more of an empire. It has the main mansion, an array of several houses, chicken runs and a plot that is used for market gardening and other agricultural activities.

According to locals, security has slackened after government withdrew state security services from the homestead.

“Pave nemaguard erhekeni, saka hapachanetse kusvika mazuvano (The place is now manned by simple guards armed only with catapults, so it is now easy to get there),” said Martin, a local villager.

With Mugabe appearing to have cared a lot about his security, a small police post was set up right across Mugabe’s homestead.

Interestingly, Mugabe appears to be a spirited entrepreneur whose homestead supplies milk, eggs and meat to locals.

“We buy those things, and sometimes one can be allowed inside, but at times you get the produce by the gate,” said Martin.

The Standard news crew failed in its attempt to enter the premises by pretending to be customers. A middle-aged man at the gate said they did not have eggs, but even from the gate, the feel of splendour amidst the scarcity in surrounding villages was apparent.

On the southern part of his vast empire lies St Francis Xavier’s Kutama College, the Catholic school that Mugabe attended while under the care of his mother Bona, during the colonial days, and on the south-east is the Kutama Father O’hea Memorial Hospital.

Both institutions, which are linked by welltarred roads, appear well-maintained and sit perfectly well, close to the Mugabe mansion, in direct contrast to the rest of the villages that have pathways and dirt roads.

It is in those village vleis that Mugabe is said to have herded cattle during his early days.

The area stretches over 20km towards Murombedzi growth point and Guzha villages, where Mugabe’s clan —the Matibiris of the Gushungo totem — live.

It is an inconspicuous and quiet place just like any other rural area with a flat, swampy terrain and has homesteads scattered all over. The only distinction is that some areas have electricity supply.

It appears, however, that Mugabe was not much liked in his own backyard.

“We feel alienated by Mugabe and as much as he ensured some of us have electricity supply among other things, he was so much on his own as he rarely consulted us his real relatives,” said a member of the Guzha family, who is of the Gushungo totem.

Some of his relatives of the Matibiri clan feel that by constructing his homestead far from his fellow clansmen, Mugabe separated himself, and others accuse his second wife, Grace, of being behind what they call Mugabe’s cold shoulder to his relatives.

“He was no longer attending key family functions and so in the end, we also switched off and let him be,” said one of the villagers.

“The real story is yet to be told, but Mugabe being one of our own, we only wish him the best in his retirement life. We only wish he could spend more time here in his homeland, touching base once again with where he came from.”

However, for some like Mbuya Sekai at Kutama, life goes on.

“There is no difference. Life is still the same, with Mugabe being president or not, and whether he visits his home frequently or not, it remains the same thing,” said Mbuya Sekai.

The post Dethroned Mugabe goes into hibernation appeared first on The Standard.