Devolution funds must be used to develop communities 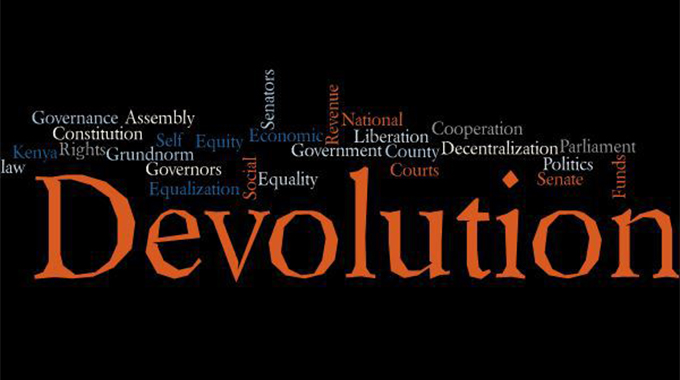 Beaven Dhliwayo Features Writer
Money given to provinces to develop their areas should be put to good use for the benefit of future generations.

Authorities entrusted with millions of dollars should know that the money belongs to taxpayers and it must be directed to their cause.

The world over, impact of fiscal decentralisation on economic growth is a widely debated topic in economic literature.

Given the unquestionable importance of economic growth poised by empowering provinces in the country, Government’s motive to decentralise finances to provinces is both timely and relevant.

Before President Mnangagwa’s call for devolution, fiscal decentralisation has been in the form of fiscal transfers from the national Government to the provincies and local authorities.

These cash transfers are nowadays called “devolved funds” in the Zimbabwean context and authorities in the provinces should put them to good use until such a time they will be able to sustain themselves. This renewed interest in fiscal decentralisation is probably fuelled by the widespread belief that fiscal decentralisation is an effective tool for increasing the efficiency of public expenditures.

One worrying situation is that of Chiredzi Rural District Council. There were near exchange of blows with the leadership over the stewardship of the$610 000 devolution fund given to the rural authority. With the money meant to spearhead development in the rural community where most of the people are finding it difficult to make ends meet, the responsible authority thought otherwise.

It is reported that the authority resolved to construct new offices and furniture using money meant to be channelled towards people-oriented projects. Members of Parliament were of the view that the $610 000 should be channelled to projects that benefit the people, who are the rightful recipients of the devolution funds.

This inhuman gesture by Chiredzi councillors should be stopped and not be seen in any other parts of the country. Chiredzi District is one of the biggest and poorest districts in Masvingo Province with poor health facilities, infrastructure and educational facilities.

Devolution funds should be put towards improving lives of people in communities through upgrading health systems, infrastructure (roads and bridges), irrigation schemes as well as educational facilities.

These funds, which are probably being generated from taxpayers money should just target life changing projects, like irrigation schemes because agriculture plays a vital role in the livelihoods of rural communities.

In Chiredzi, devolution funds should target life-changing projects like irrigation schemes such as Chilonga and Rupangwana.

The grassroots should feel President Mnangagwa’s thrust that is aimed at benefiting constituencies and not local authorities. Construction of local authority offices using devolution money is not the way to go if Zimbabwe has to restore its former glory of being the breadbasket of Africa.

In my view as a citizen, Chiredzi council was supposed to make resolutions after consulting stakeholders as devolution money is supposed to target life-changing projects, which the beneficiaries would have identified rather than diverting all the money to the construction of offices.

Devolution funds should devolve to the wards in the constituents they are directed to. Government should put to account authorities, who are diverting devolution funds to their own desired programmes. Arrests or paying back the funds will do best for the people down there.

Directing the entire devolution chunk to the construction of their offices as if they do not have anywhere to use is something the Government should not take lightly. The Treasury boss, Prof Mthuli Ncube is on point and he should stand by his word.

Addressing the third Rural District Council Chairpersons’ indaba in Victoria Falls recently, Prof Ncube said Treasury was considering increasing the amount being allocated, but would not do so until provinces and local authorities utilised what was allocated to them last year.

Going forward, it should be mandatory for local authorities to produce financial reports every quarter of the year just like what is happening for Zimbabwe Stock Exchange-listed entities. I believe there are accountants in those local authorities who are capable of producing financial statements year-in-year-out, but the powers out there are neglecting such important procedures.

Taxpayers need a sign that local authorities are doing well and they can put their hard earned money in the activities by the local Government. It is all very well if the balance sheet shows a profit.

However, the country needs to be careful, and economic analysts should break down these financial statements for the generality of Zimbabweans.

Over the years, there have been times when the balance sheet of many companies showed a profit, only to be found later that they were actually hiding losses.

Government should make accounting and compliance rules more stringent, so that companies do not feel tempted to misreport their financial figures.