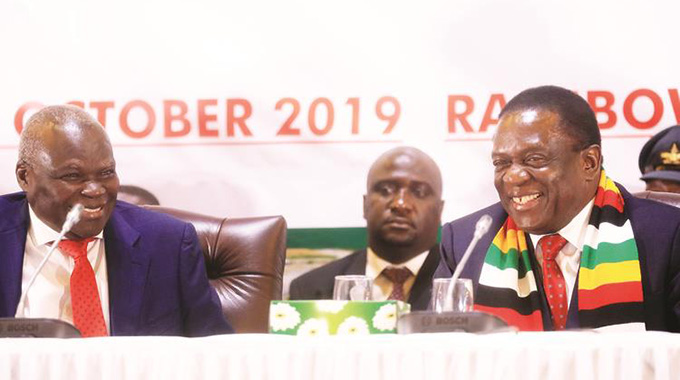 Government in the Second Republic is geared towards improving the lives of the rural populace through the policy of devolution, whose thrust is to empower local communities.

This was said by President Mnangagwa while officiating at the First Edition of the Rural Councillors Meeting in Harare yesterday.

He said Government had set aside close to $1 billion for the devolution programme.

“We have the policy of devolution as Government, meant to decentralise power and you as councillors you are the voice of our grassroots communities, so we ask you to listen to the challenges and other issues they are facing and convey them to us so that we know what the people want,” said President Mnangagwa.

“As the Second Republic, we want people in the rural areas to enjoy the fruits of the independence we have got and that can be done through improving their livelihoods.”

President Mnangagwa described the rural communities as the backbone of the nation.

“The rural district councils are the backbone of the country because most of our people reside in rural areas,” he said.

“So, when we have drought and hunger in rural areas, the whole nation will be hungry and if there are good harvests we will all sleep well because the nation would be happy. So, a wise Government does not forget its rural populace.”

President Mnangagwa said Government was already funding the devolution policy as required by the Constitution.

“We have set aside $168,7 million for devolution through the Budget and it should be used on programmes that have been agreed upon through consensus and not what you want as individuals,” he said.

“We have also extended a further $700 million that will also come to you.”

President Mnangagwa said development could only be achieved if there was improvement in infrastructure like roads.

“Development can only happen when there are good roads and we are already repairing them countrywide through the Zimbabwe National Road Authority, the District Development Fund, the councils, so that there is better movement of people and goods,” he said.

“We have our programmes to ensure a good harvest and that include the Presidential Input Support Programme and we will do all we can to ensure that every household gets seed and fertiliser.”

President Mnangagwa said there was Command Agriculture for large scale farmers that would now be administered through banks this season.

He told the councillors that they should encourage their communities to plant small grains that were drought-resistant.

“We have even discussed that issue at the AU level that we should not abandon our traditional grains,” said President Mnangagwa.

“So, at household level our farmers set aside a portion of their land so that they can harvest something even in times of droughts.”

President Mnangagwa said he had agreed with the leadership of the Association of Rural District Councils for an increment of their allowances.

“We have agreed on a figure and it will be published through a circular that will be written by the minister (of Local Government, Public Works and National Housing),” he said.

The First Edition of the Rural Councillors Meeting is a culmination of resolutions passed at the ARDC Conference held early this year in Victoria Falls.