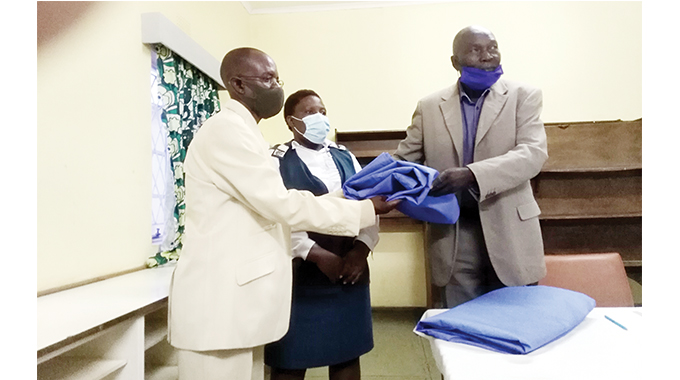 Sikhumbuzo Moyo, Senior Reporter
EXACTLY five months after restoring the dignity of pregnant women at Tsholotsho District Hospital following their donation of 96 curtains for the hospital’s maternity, the United Kingdom Tsholotsho Community on Friday donated a further 331 curtains for the rest of the health institution’s wards.

The wards, including the maternity one prior to the May donation, had been without curtains for more than 10 years with patients’ privacy compromised but following the donation by the United Kingdom Tsholotsho Community, which is made up of members who hail from the Matabeleland North district, patients admitted to the health facility now have dignity and privacy while being attended to by the health personnel.

In a brief handover ceremony held at the hospital’s boardroom where the Tsholotsho Rural District Council chief executive officer Mr Nkululeko Sibanda was the guest of honor, representative of the United Kingdom Tsholotsho Community Mr Jarath Gadlagadla Ndlovu said the main objective of the donation was not only to uplift their area of origin but to restore the dignity of both the parents and Tsholotsho District Hospital which had become an embarrassment to the dictates of health. Also in attendance was the district medical officer Doctor Nyasha Tsikira, hospital acting matron Merjury Maphosa, as well as other health personnel.

“Yes, this donation might be viewed as too little by some people because what is critical is that little as it may be, it will cover something so really I would like us all to appreciate our children for this gesture. We might have given up and told ourselves that we do not have the means to do this ourselves which is normal but our children mobilised themselves and managed to raise the few pounds and sourced these curtains,” said Ndlovu.

Speaking at the same occasion Dr Tsikira said the donation will now see them executing their ethical duties properly as they observe the patients whose privacy is key and because of the donation, it was now guaranteed.

“They have managed to donate curtains to cover the rest of the hospital, initially they gave us curtains to cover our maternity ward but like they had promised that they will come back and finish up the rest of the hospital, here we are today. It was something that we were short of and now we will be able to observe our ethical duties properly, screen our patients properly and ofcourse examine our patients properly including respecting their privacy as well. I am really and truly grateful for this donation, for myself and the rest of the staff at Tsholotsho District Hospital I would like to express our gratitude in front of everyone here present,” said Dr Tsikira.