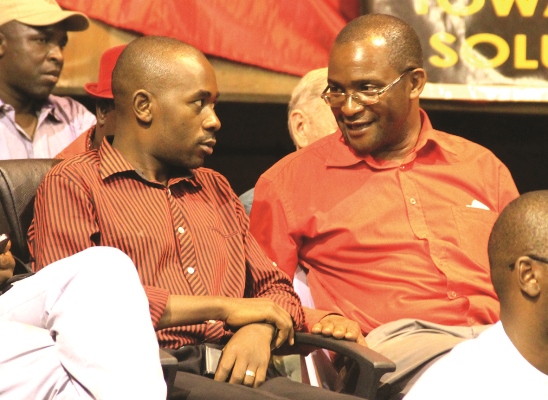 TOP MDC officials, including party president Nelson Chamisa and his potential challenger Douglas Mwonzora are not leaving anything to chance as they traverse the country coaxing through proxies for nominations ahead of the opposition movement’s elective congress next month.

So far Chamisa has been nominated by three provinces with his rival Mwonzora on the back foot amid allegations of tempering with the party structures as well as failure to open the space for women.

Yesterday, the party’s chief of staff Sesel Zvidzai publicly expressed concern with the way women have been elbowed out from the race.

“It is dog eating dog at Congress. There are no gentlemen on show.

There is no commitment to live the values we pronounce. I would like to see gentlemen of good nature taking the first step and allow a woman to walk in front while they follow. “Gentlemen who will pull the chair for that lady and ladies that will realise that it’s not by getting chairs pulled for them, they are not being demeaned,” said Zvidzai.

So far the going has been unkind towards women with Chamisa uncontested for the presidency while the race for the vice presidency is panning out to be between Welshman Ncube, Tendai Biti, Morgen Komichi and Lilian Timvieos being the only female candidate who has been nominated.

MDC spokesperson Jacob Mafume said although there have been complaints in some areas the process has on a larger scale gone on very well. “So far it has been smooth we have done the USA, Matabeleland South and North which we finished early in the morning. The president got a nomination and for the vice presidents, yes we have heard of provinces that have had problems but so far it has been okay, yes individuals might have problems but that is not widespread,” said Mafume.

Despite the cosmetics from the party’s spin doctors all is certainly not well in the opposition and insiders told the Daily News that there were delays in the elections for Matabeleland North due to infighting.

The provincial elections that were supposed to take place in the second capital city of Bulawayo were postponed to a later day, in yet another sign that all is not well in the MDC where Mwonzora’s supporters allege the structures have been tinkered with to favour the incumbent.

While many have predicted a tussle of titanic proportions between Chamisa, his deputy Elias Mudzuri and Mwonzora for the position of president, nominations that have come through from the province of United States of America, Matabeleland South  and Matabeleland North show the 41-year-old leader running away with it.

Mudzuri, who was initially seen as a challenger to the post of president, has not yet received nomination for any position. For one to be able to contest for any position, they must be nominated by at least two out of the 19-year-old political outfit’s 13 provinces out of which three including South Africa and the UK are external.

Chamisa’s challengers also accuse his lieutenants of tampering with structures and indirectly making it difficult for those reportedly outside his camp to freely open up and prepare for the elective congress.

The MDC elective congress set for May 24 to 26, is the first since the death of founding leader Morgan Tsvangirai who succumbed to cancer of the colon in February last year.

Chamisa is seeking to retain the post he took through a national council resolution following the death of Tsvangirai — a development that sparked uproar from Mudzuri and his sympathisers who felt he was entitled to take over instead.

Insiders say, Chamisa therefore wants  congress to remove any doubts over his legitimacy, as he is confident that he would win.