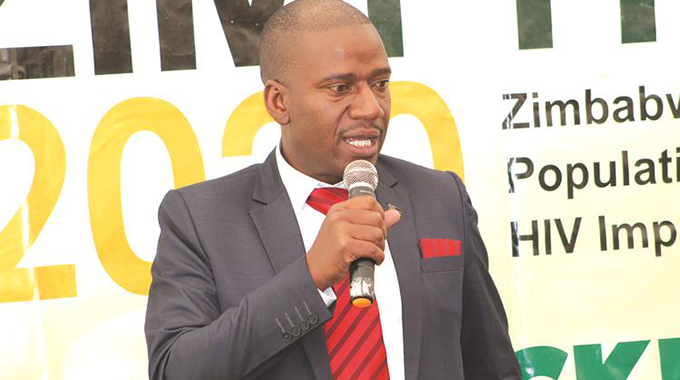 Enumerators assessing the current HIV and Aids burden and related sexually-transmitted infections will now be collecting information in Harare Province after successfully completing a similar exercise in nine other provinces countrywide.

Running under the banner, “Zimbabwe Population-based HIV Impact Assessment (ZIMPHIA)”, the enumerators will be collecting information on a door-to-door basis from randomly selected houses from next month.

In addition to collecting data on HIV and Aids and related STIs, this second round of population-based assessment will collect information on other diseases including non-communicable diseases, depression, mental health and alcohol abuse-related illnesses.

While Harare is the last province to conduct this survey, Zimbabwe is for the second time the first of six other countries in this second round to conduct this population-based HIV survey.

The first ZIMPHIA was conducted in 2015, while similar surveys were done in 12 other countries.

Six other countries conducting the survey this year are Botswana, Eswatini, Lesotho, Mozambique, Uganda and Botswana.

Speaking at a sensitisation meeting for stakeholders in Harare yesterday, National Aids Council (NAC) monitoring and evaluation director Mr Amon Mpofu appealed to residents from leafy suburbs to cooperate with enumerators during the process for the country to get the true picture on the burden of HIV and Aids and other related diseases.

Mr Mpofu said a true picture will assist the country to put in place appropriate interventions, with the ultimate goal of ending Aids by 2030.

Mr Mpofu said to achieve this goal, at least 90 percent of people living with HIV should know their status by the end of this year.

“We therefore appeal to all selected households to be welcoming to our teams when they visit your homes. It will not make sense for us to know about the epidemic in Mbare, yet we do not know the burden in Borrowdale,” said Mr Mpofu.

Mr Mpofu’s remarks followed revelations from previous HIV estimates that Harare is the forth most HIV burdened province in the country, accounting for an estimated 3 723 new infections in the 2019 estimates.

Speaking at the same occasion, ZIMPHIA director Dr Munyaradzi Mapingure said preliminary results from the survey, which started in November were expected to be announced in December.

Dr Mapingure said since the first ZIMPHIA round, which took place in 2015, the country drew a number of lessons, some of which will be used to improve the quality of the results from the survey.

“Through lessons drawn from the previous survey, we are confident of the quality of the process and subsequent results and we anticipate that our results will not take long before they are released,” said Dr Mapingure.

Led by the Government through the Ministry of Health and Child Care, National Aids Council and ZIMSTAT in partnership with ICAP at Columbia University, ZIMPHIA is funded by the Centre for Disease Control and Prevention (CDC) and the US President’s Emergency Plan for AIDS Relief  (PEPFAR).